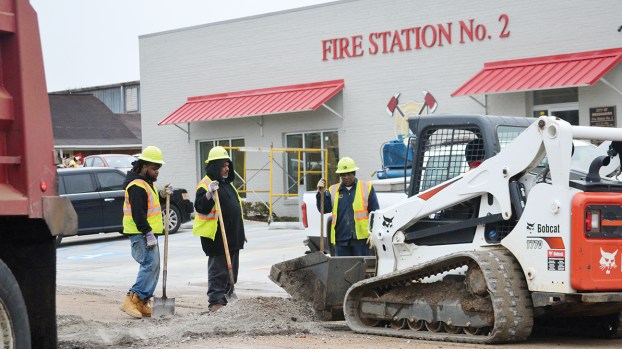 Photo by Donna Campbell Workers with Dickerson & Bowen of Brookhaven complete a few punch list items at the North First Street Fire Station Thursday. The station could be completed by the end of the month. 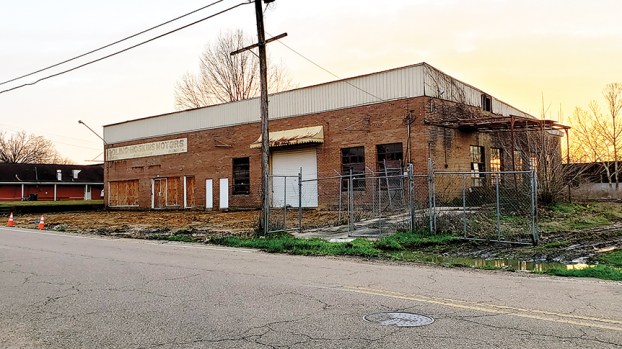 Photo by Donna Campbell Workers with Dickerson & Bowen of Brookhaven completed a few punch list items at the North First Street Fire Station Thursday. The station could be completed by the end of the month. The new station is built in the former Boling-Hoskins Motors Building.

Brookhaven firefighters are ready to put their boots down in new digs.

Work should be completed on the North First Street Fire Station by the end of the month. Contractors have a few punch list items to complete inside and some groundwork to finish.

“It looks real good. It turned out, really, really nice,” said Fire Chief Tony Weeks. “We should be in before too much longer.”

The station — constructed in the former Boling-Hoskins Motors building — will be larger than the current firehouse on Willard Street with a drive-through bay built on the side so trucks can enter on North First Street and exit from behind the building. There will be additional parking areas inside the building for smaller trucks.

The plans include a kitchen, bedrooms, three bathrooms, conference room, office, day room, workout area and laundry room as well as a covered area for grilling outside. The bays will be made of 8-inch concrete slabs with a drain for washing the trucks and a carbon monoxide detector, just one of the safety requirements that are included in the plans.

Weeks is looking forward to the extras that were included in the plans.

“We’ve got a nice classroom so we can start having class,” he said.

Forrest Dungan with Dungan Engineering told the Brookhaven Board of Aldermen this week that interior is nearly complete. Truck bays were getting an epoxy coating and exterior work was underway.

Paul Jackson & Son of Brookhaven is handling the construction on the project. The architect is Waycaster & Associates of Natchez.

The North First Street Fire Station project is mainly funded through $625,000 earmarked in the 2016 session by the Mississippi Legislature “to authorize the issuance of state general obligation bonds to assist the city of Brookhaven in paying the cost of construction, furnishing and equipping a fire station.”

The current station — a metal building constructed in the 1970s — has suffered a series of maintenance issues over the years. When the project was first proposed, Weeks recommended the new station be built larger than the existing facility. He said city fire trucks are barely able to fit into the current structure’s bays.

Sen. Sally Doty and Reps. Becky Currie and Vince Mangold, all Republican lawmakers from Brookhaven, voted in favor of a multi-million-dollar bond bill in April 2016, $625,000 of which was designated for a fire station. The money remained in the city’s general fund, drawing interest at a standard rate, until the project began last year.

Weeks, Mayor Joe Cox and the former administration had pitched the city’s need to replace Fire Station 2 to different sources since 2014. In September 2018, aldermen voted 4-1 to purchase property at 222 North First St. for the new fire station at a cost of $92,500, $1,500 below the appraised value.