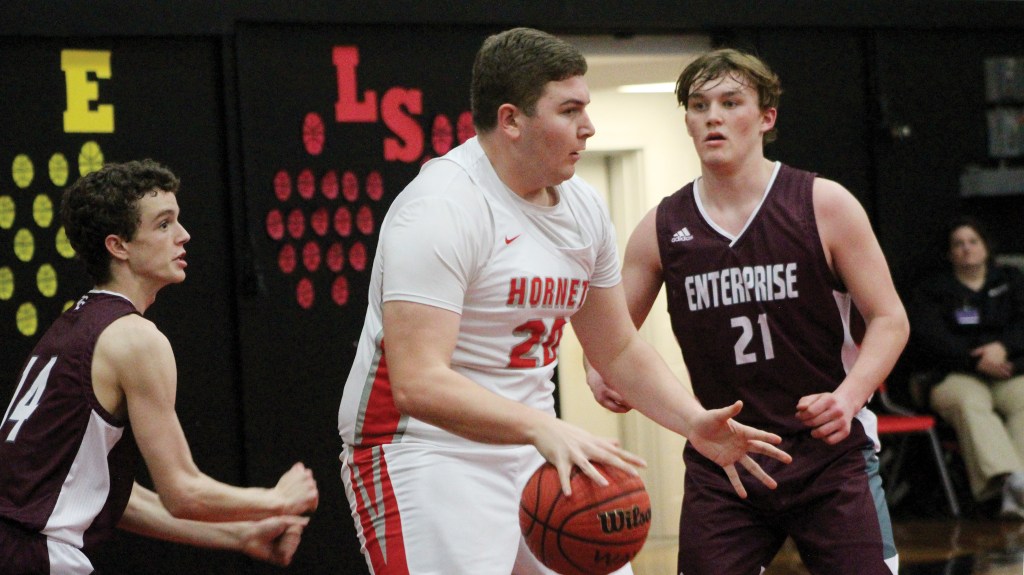 Photo by Cliff Furr Sophomore Taylor Presley (no. 14) and junior Dylan Carter (no. 21) of Enterprise collapse on Loyd Star senior forward Peyton Morse in the paint Tuesday night at the Region 7-2A tournament.

The West Lincoln Bears and Loyd Star Hornets were the victors Tuesday night in quarterfinal play at the Region 7-2A tournament hosted by Loyd Star.

As he has been all season, senior guard Karlton Byrd was the straw that stirs the drink for West Lincoln (14-10) Tuesday night. The crafty 6-foot-1 Byrd scored on a variety of floaters from the inside and shots from deep to lead his team with 24 points in a 72-32 win.

Bogue Chitto (6-20) dressed only eight as they have for much of the year, but their effort was spirited as West Lincoln led 14-7 at the end of the first quarter.

In the long, proud history of BC athletics there haven’t been many student-athletes that handled themselves with more class than Upkins. Battling inside with the bigger Keshon Byrd for the fourth time this season, Upkins played just as hard in the final minutes of the game as he did at the tip.

BC also got six points from guard Cameron Williams.

Expect Wesson and West Lincoln to be a good one Thursday night as they had a pair of battles in the regular season. WL won 53-50 in Copiah County before the Cobras came back for revenge later in the season with a 56-43 win in Fleahop.

The last game of the night had the nets popping as Enterprise (4-16) and Loyd Star (11-14) were both dialed in from deep.

Enterprise made 11 3-pointers as a team and Loyd Star knocked down 10 shots from long range themselves, but a late surge by the Hornets would be the difference in a 70-48 win.

The game was close throughout as Loyd Star led 47-39 after three quarters.

Early in the fourth quarter, EAC had cut the lead to four points before Loyd Star ball pressure cracked the game open.

The Hornets jumped out into the passing lanes and rang up a string of transition buckets off turnovers that turned it into a rout.

“This final score doesn’t indicate how close the game actually was,” said LS head coach Seth Britt. “Both teams shot the ball really well and I’m proud of my guys for the way they played late.”

Next up for Loyd Star is a matchup with the top seeded Amite County Trojans. Amite County (19-3) went 10-0 in division play and won those games by an average of 40 points.

“The key for us will be slowing the tempo down and trying to limit what Amite County gets in transition,” said Britt. “We’re going to have to take great care of the ball.”

All four semifinalists qualify for the MHSAA 2A State Tournament that begins Tuesday. The top two finishers will host on Tuesday while the lower two seeds will travel.

Friday, the consolation game begins at 5:30 p.m. with the championship starting at 8:30 p.m.