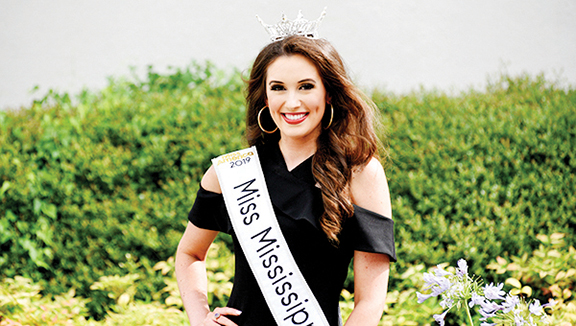 If your daughter loves characters from Disney movies, imagine her excitement at meeting those characters at the historic Butterfield Mansion in Brookhaven.

The occasion on Feb. 29 is a Mommy & Me Princess Tea, featuring Disney characters and Miss Mississippi 2019 Mary Margaret Hyer. The tea is a fundraiser for this year’s American Cancer Society Relay For Life, to be held April 25 at Copiah-Lincoln Community College.

Girls who attend the tea are encouraged to dress up as their favorite princesses (and moms can, too) for activities that run from 10 a.m. to noon on Storm Avenue at the stately, white-columned mansion, complete with a grand staircase inside.

Breakfast will be served in “tea” style and princesses will go to different stations, where they can enjoy activities such as Cinderella reading a story and a coloring session with Snow White.

The Disney characters will include Belle from “Beauty and the Beast,” Elsa and Anna from “Frozen,” Ariel from “The Little Mermaid,” Pocahontas, and several others.

“Princesses” who attend can have their pictures taken with the characters and with the 2019 Miss Mississippi.

Mason also is a member of the Copiah Lincoln Relay For Life committee. She hopes the tea will be a successful way of bringing the community together in advance of Relay for Life.

Mason said she came up with the idea of a Princess Tea and pitched it to committee members. Princess Teas featuring Disney characters have become a popular mother-daughter event in areas around the nation.

The idea sold itself.

“I only had to make a few calls to pull it together,” Mason said.

Butterfield owners Stacie and Jeff Cross immediately agreed to host the tea at their mansion.

The Crosses have been renting out their home for events, including weddings, since they finished restoring the mansion in 2019. The property’s previous owner died in 2013 and the mansion had fallen into disrepair before the Crosses bought the property in 2017. The mansion is more than 100 years old.

“We’re ready to host this fun event for a good cause in our fight against cancer,” Stacie Cross said.

Girls who attend “will be mini princesses” for the day “in our beautiful mansion,” she said.

Stacie Cross also is community development manager for the AmericanCancer Society of Southwest Mississippi, and also is focused on Relay For Life, the organization’s largest annual fundraiser.

“The community was so supportive of us restoring the mansion,” she said.

“We are happy to open the mansion to mothers and daughters for this fun tea as they show their support for Relay For Life.”

A call to Farm Bureau agent Sam Sones led to “a pretty easy answer — yes,” said Sones, who agreed to sponsor the tea.

He’s a neighbor of the Crosses, carries their insurance and his agency is actively involved in community events. His wife is a former Disney face character.

Sones has his own personal cancer story.

“My sister, when she was 7, was diagnosed with cancer and was told it was terminal,” Sones said.

“She’s now over 40 years old. I support any efforts to fight cancer and help those who have it.”

Sones said his wife Brittany and their 3-year-old daughter will attend the tea. His daughter will probably dress as a character from “Frozen,” he said.