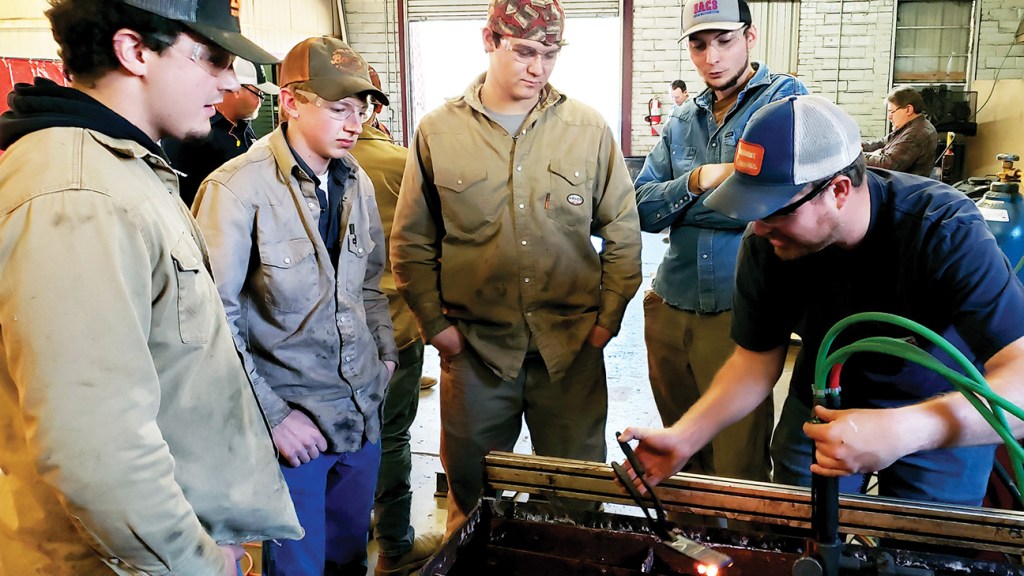 Over the past several years, Loyd Star’s Agricultural Academy has been focused on making its students career ready. In pursuit of that goal — and the goal of having a bit of fun — Loyd Star hosted its first welding competition Friday.

Welding is just one of many skills taught at the educational academy, but it’s one agriculture instructor Billy Sumrall said his students has an affinity for.

“We’re a traditional agriculture class,” he said. “We’re not a welding program per se, but we teach AG Mechanics in our program, and within that is also welding and things of that nature — repair and maintenance.”

The competition drew in four additional career and technical centers from North Pike, South Pike, Franklin County and Walthall County school districts. Sumrall said students were given 45 minutes to complete two different weld structures, as well as a destructive weld test where students bent and cut structures in half.

“The whole time, they’re being evaluated on their safety, their setup operations and how well they perform their duties,” Sumrall said.

Students were evaluated by outside professionals representing several businesses — some local — with a need for skilled tradespeople including Haley Construction, Boyd Steel, Henderson Weld Test and Fabricated Pipe.

Loyd Star came in first place during the competition — perhaps not surprising considering the work that has gone into the program. Sumrall said Loyd Star has had an agricultural program for decades. But in a world with continuously rising tuition costs and what Sumrall describes as a huge national shortage in the job market for people with employable trade skills, the Agricultural Academy has been working to position itself as a place where students can find a trade right out of high school or be ahead of the competition in a two year Career and Technical Education program.

Employability is an important goal for Sumrall and the Agricultural Academy. In 2018, Loyd Star’s agriculture program became the first to partner with iCEV, a company providing online self-paced CTE certifications. Sumrall said Loyd Star’s goal has been to work with students from a young age and provide a solid foundation for the future. Sumrall said his students have been successful finding employment.

“We’re putting an emphasis on employment skills,” he said. “We’ve been working on that for the last 12 years. Every year it gets better and better. We have students that are engaged. They’re thinking about their career options out there. They’re trying to set a plan. If they can become financially secure and productive citizens in our community, that’s what we’re after.”