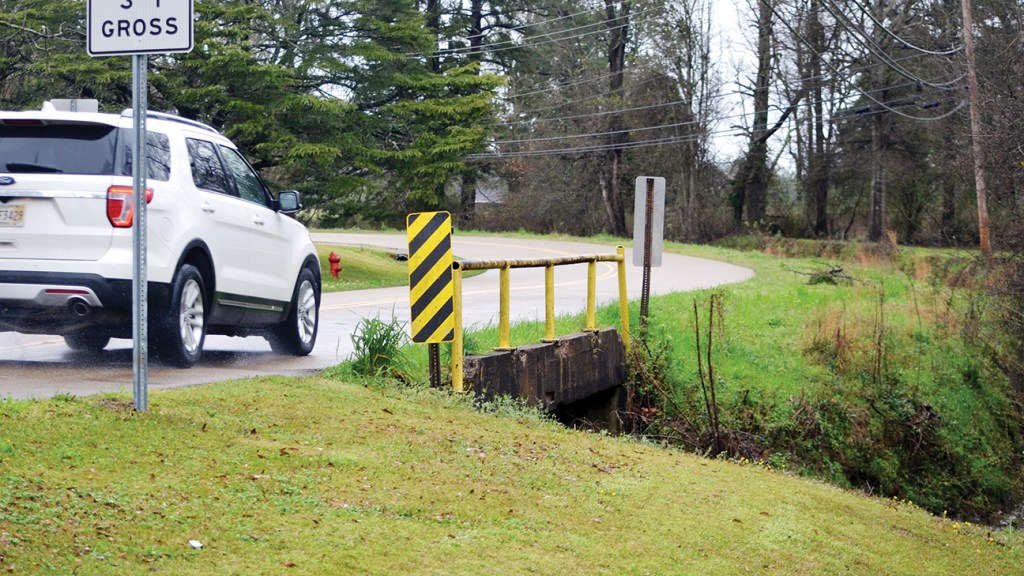 Photo by Donna Campbell The North Jackson Street Bridge has historically been approved for vehicles up to 6,000 pounds. Brookhaven aldermen voted Tuesday to reduce the weight limit to 3,000 pounds, due to structural problems.

Engineers are closely watching an 81-year-old bridge on North Jackson Street that may be nearing the end of its usefulness.

Brookhaven aldermen Tuesday voted to reduce the weight limit on the North Jackson Street Bridge by half and replace the signs that currently authorize vehicles up to 6,000 pounds to cross.

“It’s had a good life,” consultant Ryan Holmes with Dungan Engineering said. “We’ve got a lot of service out of it.”

The motion was made by Ward 4 Alderman Jason Snider and seconded by Ward 6 Alderwoman Shelley Harrigill. It passed 5-0 with Alderwoman-at-Large Karen Sullivan and Ward 2 Alderman Shannon Moore absent.

The bridge is inspected yearly, rather than every two years, because of its condition, which is declining, Holmes said.

“The amount of rain since we’ve had since November and December has caused concern. The bridge was built with concrete headwalls, that’s what the bridge deck is sitting on,” he said. “There’s a dip there now when you go across it. When it rains the water comes up pretty quick and it goes down pretty quick.”

That’s called undermining, or scouring, and is caused by water coming up into the cavity under the bridge and “sucking soil out from behind the wall.”

Holmes said there’s also a crack in the headwall, and they take measurements and photographs routinely. The crack is showing an increase in size, he said.

The wall has rotated about three-fourths of an inch since they’ve been recording the movement.

“I say all that to say we need to move toward a more urgent plan to replace that,” he said.

They’ll continue to watch the bridge.

“Anytime we have a major rain event, we’re going to go up there as soon as the water recedes and inspect it,” he said.

Mayor Joe Cox said the bridge sees about 3,800 vehicles per day and this new lower weight limit will restrict the use of it by school buses, garbage trucks and larger vehicles.

Cox said it will be inconvenient for travelers, but it’s a safer option.

“I think people will be thrilled to know we’re doing something,” Harrigill said.

Holmes, who met with Cox and Public Works Director Keith Lewis at the bridge Monday, said the city needs to look at a replacement option and he’s not sure if the bridge will be able to remain open before it can be replaced.

“Obviously, safety is our most important objective here, keeping the traveling public safe,” he said.

“In the meanwhile, hopefully we can keep the bridge open as long as we can,” Holmes said. “It’s really my engineering judgment, and when I get to the point where I’m not comfortable, I’m going to have to make a call.”

A load rating engineer through the state’s bridge inspection program is scheduled to visit, but it can take a few months for that to occur because of their workload.

The city will encounter several hurdles to replace the bridge.

“If you want to draw up a difficult situation with a bridge, that’s one,” Holmes said. “We’ve got water and sewer on both sides of the road, a gas line and a major power line just off the edge of the bridge. It’s going to be a tough one to work around.”

The stream under it is recognized by FEMA as a floodway. The city is part of the National Flood Program and through that there is a no-rise policy.

Holmes will soon start the preliminary process to determine the best replacement option for the bridge, which will include surveys and hydraulic study of the strength, and figuring out the cost to relocate all the utilities.