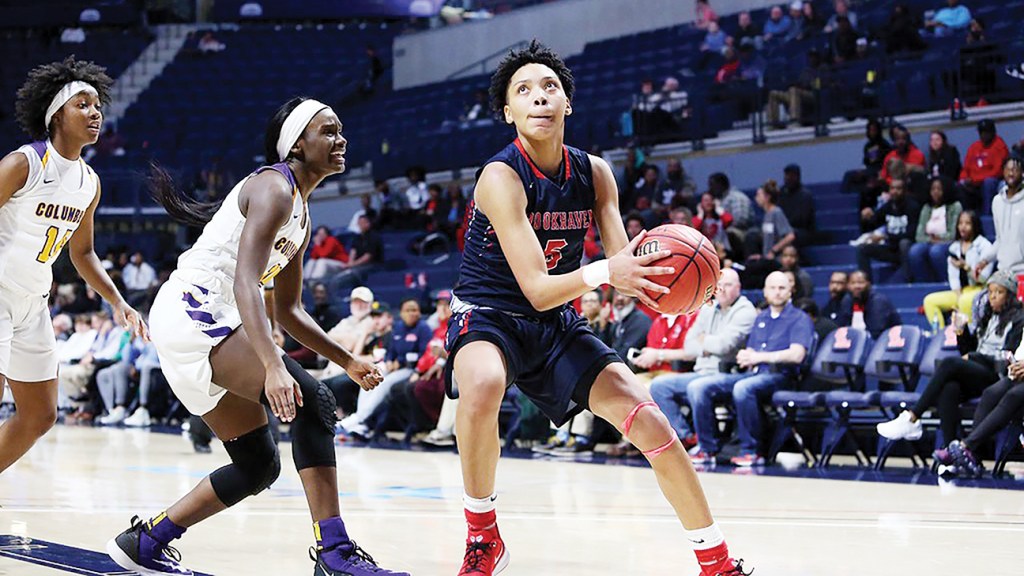 A dream season came to an end Friday in Oxford for the Brookhaven High Lady Panthers (28-4) as they saw Columbus High (26-4) take a 55-51 win in the MHSAA 5A state championship at Ole Miss.

A pair of Snudda Collins free throws pulled BHS to within 51-50 with 23 seconds left.

Columbus went back up 52-50 when Bri Smith went 1-of-2 from the free throw line.

An over the back call on the missed shot allowed BHS to walk the ball back down the court for a pair of free throws.

Junior point guard Ashanti Louis went 1-of-2 from the line to make the score 52-51.

BHS fouled Aniya Saddler of CHS and the senior leading scorer for the Lady Falcons missed both free throws.

However, the Lady Panthers couldn’t cleanly field the rebound and Saddler grabbed it to retain possession for her team.

Forced to foul again to stop the clock, this time BHS fouled Shania Givens of Columbus as the lead was still 52-51.

Givens made her first but missed her second.

And like a nightmare — for a second straight time — Columbus got the free throw on a missed free throw.

With 10 second left Givens made her first free-shot to make the scored 54-51.

She missed the second shot — but any hope of a BHS game-tying shot was killed by another Columbus offensive rebound, this one by Bri Smith.

Smith made 1-of-2 and as a 3-pointer at the buzzer was no good for BHS.

The Lady Panthers had battled back all night as the first half was owned by Columbus.

CHS went up 10-4 early in the game. A Collins jumper just before the first quarter horn cut the lead to 14-10 after the opening eight minutes.

Collins knocked down a 3-pointer midway through the second quarter that made the score 18-16 in favor of Columbus.

The Lady Falcons responded with a 12-4 run over the final four minutes of the first half that gave them a 30-20 lead at the break.

Junior point guard DJ Jackson had 12 points at halftime and Saddler scored 10 as that pair alone outscored BHS in the opening two quarters.

Coach Preston Wilson and his staff have been great at making second half adjustments all season and in the third quarter BHS looked like a completely different team.

The pressure defense of BHS held Columbus without a field goal for the first six minutes of the third quarter.

Back-to-back 3-pointers from Ayanna McNairy pulled BHS to within one possession and then the Lady Panthers tied the game at 32 on a Louis layup.

A 3-pointer by Collins then put BHS up 35-32 as the Ole Brook fans in attendance roared to life.

Columbus clawed back to hold a 39-38 lead after three quarters.

Playing on the court she’ll call home for the next four years when she suits up for Ole Miss — Collins led all scorers with 22 points.

McNairy scored 15 points and was the only other Lady Panther in double figures. Angel Wilkinson scored five points as did Louis. Jayla Henry added four points.

Saddler led Columbus with 19 points. She’ll be teammates next season at Mississippi Gulf Coast with McNairy.

Jackson finished with 17 points and was 3-of-6 from the 3-point line. The Lady Falcons were 17-of-31 from the free throw line. Brookhaven only attempted 15 free throws of which they made 11.

Columbus only turned the ball over nine times compared with 16 for BHS. The Lady Falcons also won the rebounding battle 40-35 and were a proficient 4-of-9 from the 3-point line.

CHS scored their final 10 points of the game from the free throw line and went without a field goal over the final five minutes of action.