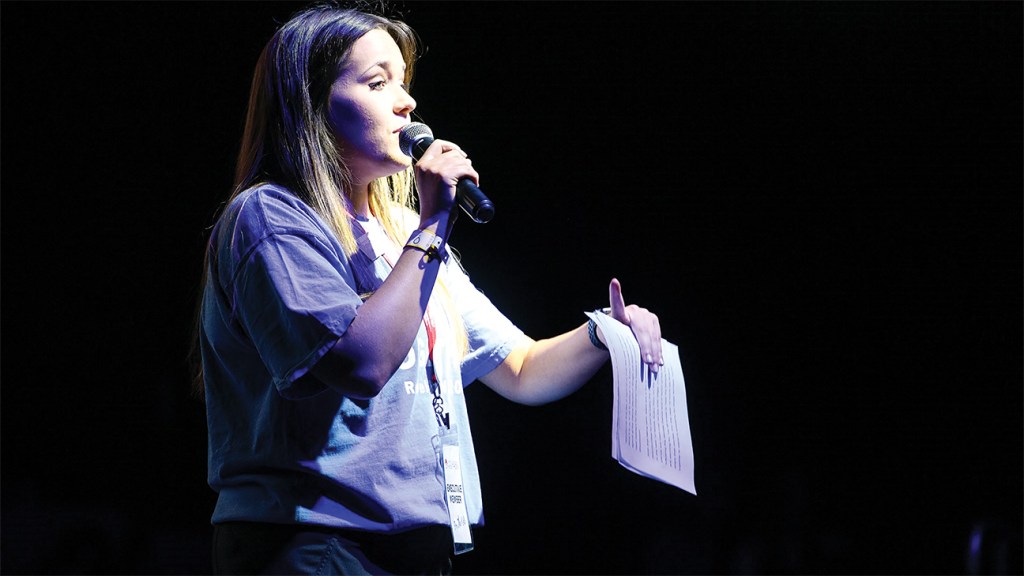 Photo submitted Brookhaven native Jamie Sproles cheers on the crowd at RebelTHON, a fundraiser at the University of Mississippi for the Blair E. Batson Children’s Hospital. Students and other donors raised just over $252,000.

A Brookhaven native is the leader of an Ole Miss group that recently raised more than a quarter of a million dollars for the Blair E. Batson Children’s Hospital on the University of Mississippi Medical Center campus in Jackson.

Jamie Sproles, president of the 2020 RebelTHON fundraiser, helped organize and host a 12-hour danceathon on Feb. 15. The fundraiser, which raised $252,517, will help pay for Batson’s Level IV neonatal and pediatric intensive care units. It’s the only children’s hospital in the state.

“All my life, I was brought up to be of service to my community,” Sproles said. “I’m so glad I was able to give my time to raise money for the Children’s Hospital.”

Sproles, daughter of Tommy and JoAnna Sproles, joined the RebelTHON as a freshman at the University of Mississippi.

“This is the year we’ve hit a total of $1 million over the past eight years,” Sproles said. “It’s a big year for the Rebels and the hospital.”

More than 1,000 students registered with $20 in a donor drive, with everyone challenged to raise $80 or more from friends and family, she said.

Sproles graduated from Brookhaven High in 2016.

She is now a senior at Ole Miss with double majors in secondary English education and public policy leadership.

In high school, she played trumpet in the band, was on the speech, debate and tennis teams, and was a member of the National Honor Society and a local Girl Scouts troop.

She plans to graduate in May from Ole Miss, where she is a member of the Honors College, the Mississippi Excellence in Teaching program and the Trent Lott Public Policy Institute.

She is attending college on a full scholarship through the METP, which requires graduates to teach for five years in a Mississippi public school before pursuing jobs elsewhere.

“I’m really looking forward to working in a classroom, and I plan to later pursue master’s and doctorate’s degrees,” she said.

Sproles said she will leave college with good memories of visiting the Children’s Hospital. A lot of people are “privileged” in that their newborns and other children have never needed intensive, life-saving care, she said.

“I urge anyone who can to donate to the hospital,” Sproles said.