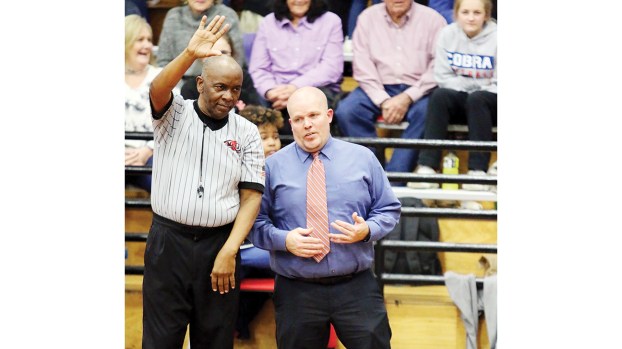 Photo by LIsa Smith Newman converses with an official during the championship game of the Region 7-2A tournament at Loyd Star. 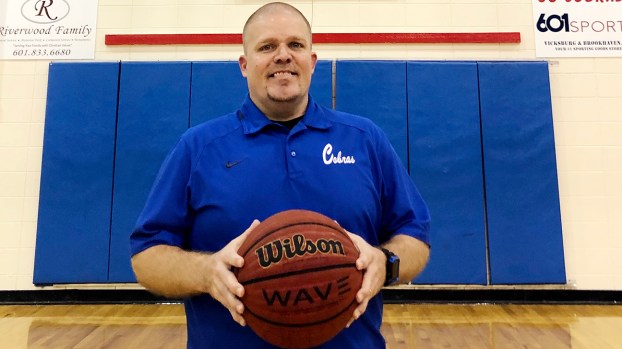 Photo by Cliff Furr Rusty Newman of Wesson is The Daily Leader 2020 All-Area Coach of the Year.

The Wesson Cobras (15-12) were runners-up this season to a dominant Amite County (23-4) team in Region 7-2A. They won a thrilling 70-67 victory over Taylorsville (18-7) in the opening round of the MHSAA 2A playoffs. In their second-round game at Philadelphia the Cobras battled with a Tornado team that made the 2A semifinals before seeing their season end with a 65-56 defeat.

Longtime Wesson coach Rusty Newman had a tough group that played together and played their best basketball late in the season. For his efforts Newman has been named The Daily Leader All-Area Coach of the Year.

“I really enjoyed coaching this group of kids,” said Newman. “We had great leadership from within the team and that makes your job so much easier.”

This is the second time in his career for Newman to receive the honor.

Wesson was a dream job for Newman who is an alum of the school. He cut his teeth early in his career coaching middle school basketball and high school softball at South Pike. He then was an assistant at Lawrence County for one season before being hired by Wesson.

A 1999 graduate, when Newman was hired in 2010 he told The Daily Leader that the Wesson job “has a special place in my heart.”

Talk to him now and you can tell that the most special place in his heart is for his players — second behind only his wife Sarah and sons Dayne and Peck.

Newman is a player’s coach who empathizes with the things that his young men are going through in their lives. His connection goes beyond basketball and there is nothing he won’t do to make sure his players have all they need to tackle the hard times they may face.

One of the best players that’s come through Wesson during Newman’s time as coach is current William Carey and former Co-Lin forward Anthony Jones. The now 6-foot-6 Jones was the leading scorer in the state as a senior and for years if you saw Newman, you saw Jones with him.

“He’s the type of coach that would help you in any way possible,” says Jones. “Always coming early to allow you to work out and improve while also staying late to allow you to put in work. To this day he still comes to see me play at Carey when he can.”

Newman is close to finishing his requirements for his administration certification. He’s had three 20-win seasons during his ten-year tenor at Wesson and last season the Cobras won 19 games as a 3A school.

He is effusive in his praise for the leadership provided this season by seniors Darrian Gibson and Kenner Bizot.

“Kenner wasn’t really a vocal guy, but his leadership through the example of how he works was big for us,” said Newman. “I’ve been coaching Darrian a long time and I could be real with him and know that he could take it. I really enjoyed watching him grow up as a player and young man.”

And like Wesson coach Jeremy Loy in football, Newman could go on-and-on about the quality of character possessed by junior guard Antrelle Sims.

“We’ve got a routine with how we start our practices,” said Newman. “I want them to hit the court and go through that routine as I’m coming in from teaching. Antrelle is the type of guy that’s going to make sure everyone is out of the locker room and locked in as soon as we hit the court. He’s not going to put up with anyone being silly.”

“You can really run down our entire roster — Damien Smith, Larson Lewis, Terrence Haley — all guys that I just enjoyed being around,” said Newman. They were a fun group to coach, top-to-bottom.”