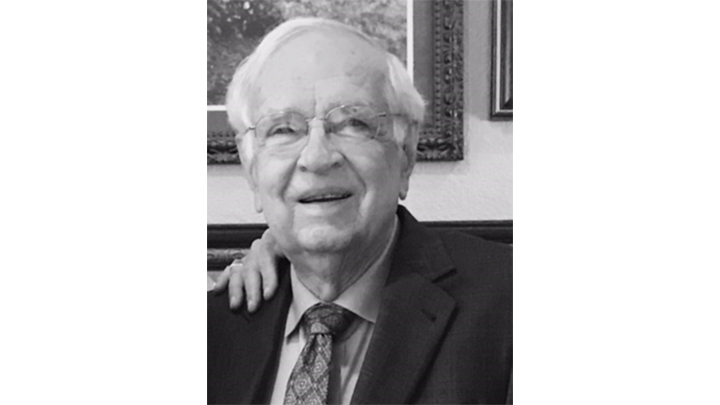 On a cold night, January 28, 1933 a young farmer in the small German community of Avery, Oklahoma saddled his horse and rode to a neighbor’s home to ask her to assist his wife in childbirth. That night, Arthur Fredrick Oestmann was born to Arthur Diedrich Oestmann and Ida Wolff Oestmann. He went to be with his Heavenly Father early Sunday morning, April 12, 2020, in Brookhaven, Mississippi.

Art, or Junior as he was known to his family there, remained on the family farm learning the value of work, family and faith until graduating from Cushing High School in 1951. He then attended Oklahoma State University (Oklahoma A & M at the time) graduating in 1955 with a degree in geology. His love of geology and the oil business started as a teenager when he ﬁrst watched seismic crews working near his home. Years later, when moving his daughter to college with her many trunks and supplies, he commented on how things had changed as he recalled how he had left for college with one brown suitcase and hitch hiked between home and school.

He began his working career with Humble Oil & Reﬁning in Houston in 1955.

Humble immediately sent their new geophysicist to work on a seismic crew based out of Hattiesburg, Mississippi. While working there he met a beautiful southern belle from Brookhaven, Mississippi named Nan Lea. They were married December 9, 1956 and were blessed to celebrate 63 years together. They began their life together in New Orleans, then moved to Midland, Texas in 1958.

Art worked for Humble and Exxon until 1975 when he left to open a Midland offce for Hunt Energy. He later worked for Reeves & Zimmerman and Coastal Corporation until starting his own company, Nanlea Oil in 1987. In June of 2019 he completed 64 years of going to work every day. He claimed he had the current record as the longest continually practicing geophysicist in Midland, working the Permian Basin from Midland since 1958.  After forming Nanlea, Art partnered with Terry Michael, and together they generated a number of projects, some successful, some not, and they formed a close friendship that continued until his death. All who knew him in his work life admired him not only for his geologic skill, but especially for his honesty and integrity.  He was a member of the Society of Exploration Geophysicists, PBGS where he served as President, AAPG, WTGS, who awarded him their Pioneer award, SIPES, the Midland Petroleum Club, the ‘other’ Dirty Dozen, and he had also served as President of the Kiwanis Club, the Exxon Retirees Club and the Midland Downtown Lions Club.  He volunteered at Meals on Wheels, packing lunches for delivery to home bound seniors.  Everyone he met became his friend.

Art loved the Church.  He became a member of Westway Church of Christ in Midland in 1962, and actively and faithfully served the Lord and others through the Church in many capacities over the years. He served until his passing as an Elder and fostered strong loving ties in his Church family. He was known throughout the Church of Christ as a kind and gentle man, an encourager who loved the Lord and loved others.

Art loved his family and went to great efforts throughout his life to spend time with them and form strong family relationships. He never tired of talking about his family and his greatest joys centered on them, especially his grandchildren and great-grandchildren.  Art and Nan were blessed with two children who survive him, Michael Oestmann and wife Cathy of Midland, and Melissa Lea Oestmann of Norman, Oklahoma. In addition to his adoring wife Nan, he is also survived by their four granddaughters; Laura and husband Travis Bow, Reno, NV, Elizabeth and husband Derek Nichols, Edmond, OK, Melissa and husband Tyler Garner, Norman, OK, and Hallie and husband Austin Wilson, Warr Acres, OK.  Art was thrilled to know and love six great-grandchildren, Gunnar, Jane, Roger, Hadelyn, Ruger and Sunley.  He was anxious to welcome number seven to the family later this year. He is also survived by his sister Nelda and husband Willard Johnston of Tulsa, OK and a large number of nieces, nephews and cousins and their families. He was preceded in death by his parents, his brother Melvin Oestmann and his wife Dorothy, a nephew, Jeffrey Johnston, and his sister-in-law Betty Johnston.

Art simply lived his life as a Christian. We look forward to being with him again in a better land. He will be greatly missed by his family, his Church family and his many friends and associates.

A private graveside service at New Salem Church of Christ near Brookhaven, Mississippi is planned for Thursday April 16 at 10 AM.   Honorary pallbearers are nephews Ron Oestmann, Phil, Mark and Brian Johnston, Carter Lea and his grandsons-in-law Travis Bow, Derek Nichols, Tyler Garner and Austin Wilson. Riverwood Family Funeral Service is in charge of the arrangements.

A memorial service in Midland will be planned at some point in the future.

In lieu of ﬂowers the family suggest memorials be directed to Texas Children’s Heart Center in support of their new Fontan Clinic beneﬁting children with congenital heart defects. Art’s great granddaughter will be one of the many children receiving care from this new clinic and Art would welcome you joining his family in its support. Donations may be sent in memory of Art Oestmann to Texas Children’s Offce of Philanthropy, Ste. 5214, P.O. Box 300630  Houston, TX 77230-0630 or online at http://give.texaschildrens.org/goto/art.

Or The University of Texas MD Anderson Cancer Center, P.O. Box 4486, Houston, TX 77210-4486 or online at mdanderson.org/gifts.  Please notate “In memory of Art Oestmann” in the memo line.  Or a charity of your choice.

If you would like to leave a word of sympathy to the family, you may do so at www.riverwoodfamily.com.