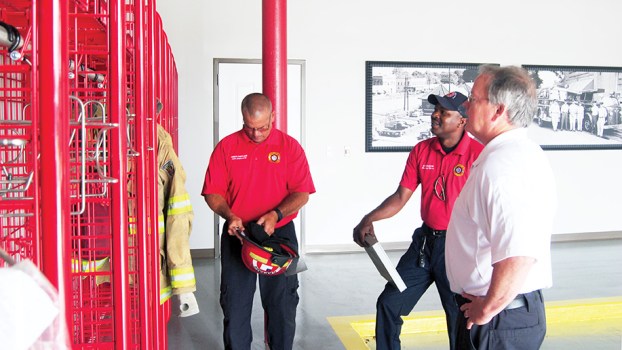 New fire station is complete, crew to move in soon

When the Brookhaven Board of Aldermen reconvened its regular June meeting on Tuesday afternoon at 3 p.m., the first item on the agenda was hearing from Forrest Dungan and Ryan Holmes of Dungan Engineering on the progress at the station.

“It’s finished. It’s complete,” Dungan said, presenting the board with a large box of documentation on all work completed on the project.

The announcement was met with applause from those present.

Work on the station was projected to be complete by the end of February, with just a few punch list items and groundwork to finish, but COVID-19 restrictions put the work on hold until recently.

The station — constructed in the former Boling-Hoskins Motors building — is larger than the current firehouse on Willard Street with a drive-through bay built on the side so trucks can enter on North First Street and exit from behind the building. There are also additional parking areas inside the building for smaller trucks.

The completed building includes a kitchen, bedrooms, three bathrooms, conference room, office, day room, workout area and laundry room as well as a covered area for grilling outside. The bays are made of 8-inch concrete slabs with a drain for washing the trucks and a carbon monoxide detector, just one of the safety requirements included in the plans.

Paul Jackson & Son of Brookhaven handled the construction on the project. The architect is Waycaster & Associates of Natchez.

The North First Street Fire Station project was primarily funded through $625,000 earmarked in the 2016 session by the Mississippi Legislature “to authorize the issuance of state general obligation bonds to assist the city of Brookhaven in paying the cost of construction, furnishing and equipping a fire station.”

The current station — a metal building constructed in the 1970s — has suffered a series of maintenance issues over the years. When the project was first proposed, Weeks recommended the new station be built larger than the existing facility. He said city fire trucks are barely able to fit into the current structure’s bays.

Sen. Sally Doty and Reps. Becky Currie and Vince Mangold, all Republican lawmakers from Brookhaven, voted in favor of a multi-million-dollar bond bill in April 2016, $625,000 of which was designated for a fire station. The money remained in the city’s general fund, drawing interest at a standard rate, until the project began last year.

Weeks, Mayor Joe Cox and the former administration had pitched the city’s need to replace Fire Station 2 to different sources since 2014. In September 2018, aldermen voted 4-1 to purchase property at 222 North First St. for the new fire station at a cost of $92,500, $1,500 below the appraised value.

The city will mark the official opening of the new station with a ribbon cutting, with the date to be announced at the next regular board meeting on July 7.

A quorum of the board was present. Absent were Alderwoman-at-large Karen Sullivan and Ward 3 Alderwoman Mary Wilson.

• The board approved amending the current statute on debris pickup to require commercial contractors — whether landscaping, tree trimming or construction — to remove their own debris from a property rather than leaving it for city workers to pickup and dispose of, pending proper public notifications.

• The board approved the mayor’s recommendations to reappoint Joe Fernald as city attorney — by a vote of 4-1, with Ward 2 Alderman Shannon Moore casting the lone “no” vote — and Max Haley as city auditor — by a vote of 5-0 — for the 2020-2021 fiscal year.

• The board approved a request to have a fireworks display at Brookhaven Country Club Friday 9-10 p.m. Chief Weeks said a fire truck would be on standby.

• The board approved a preliminary plat of the Mill Creek development on South First Street so Phase 1 of construction can commence. A plat is an official, surveyed document that creates lots for residential and commercial developments and makes the lot legal.

• The board discussed the possibility of accepting ownership of a street owned by Haven Hall Health Care so the street can be maintained by the city. Board attorney Fernald said he was looking into the matter.