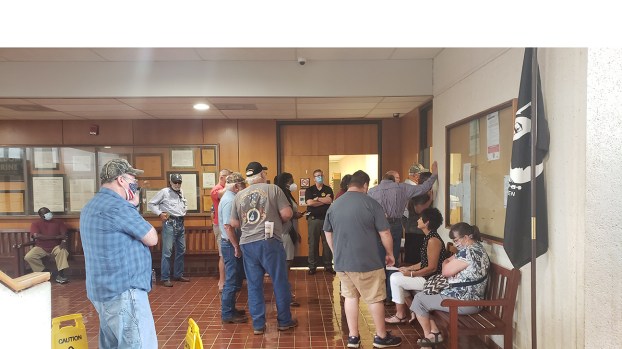 Photo submitted About 20 people congregate outside the boardroom as supervisors meet on Monday morning.

On Monday, the Rev. Dr. Rico Cain, president of the Lincoln County chapter of the NAACP, called out Lincoln County Board Of Supervisors President Eddie Brown, accusing him of creating racial division among county citizens.

“We are trying to keep peace in this community,” Cain said.

Cain spoke at the board’s meeting on Monday. He said a friend told him Brown allegedly sent out a text message asking residents to come to the Monday meeting to stand in opposition against Cain’s request.

Cain handed out copies of what he alleges is a text message originating from a “friend” of Brown’s, asking for people to “show up” to the Monday meeting in anticipation of a request by Cain to rename a street “Black Lives Matter.”

“Eddie Brown intentionally sent this text out and called everybody out, all white people, so they could ambush me this morning,” Cain said. “He has caused racial tension to raise 100%.”

Brown denied any involvement in any such text message.

“It wasn’t me, but I’m getting the blame for it,” Brown said. “I did not write that and put it out. I would never do that. I don’t know how it happened, but it wasn’t me.”

About 20 people gathered outside the boardroom. Some said they were there to speak against a county street being renamed “Black Lives Matter.”

However, no request for any street name change was made to the supervisors on Monday.

During the meeting, Cain — and two other pastors — expressed his intent of acquiring masks for area pastors to hand out at their church services.

“It was a suggestion,” Cain said during the meeting.

“There’s a lot of people that don’t have transportation.”

In other business, the Board of Supervisors approved the following:

• Meal count sheets for week 39 for the Sheriff’s Department

• The minutes from the June 26 meeting

• A personnel report regarding Damian Gatlin’s resignation from the Sheriff’s Department.

The number of COVID-19 cases continues to rise in Lincoln County and across the state. As of July 6, Mississippi... read more