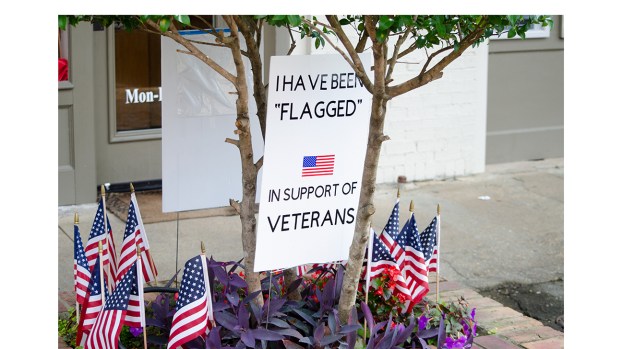 Starting July 4, VFW Post 2618 began flagging homes and businesses to raise money for Wreaths Across America, a nonprofit organization that provides wreaths for graves of veterans during the holidays, along with other military support programs.

“It’s a lot of fun,” Post Commander Greg Marlow said of the fundraiser.

Those who are interested can flag a friend or neighbor’s home or business by donating $30 to the VFW. A sign and 12 small American flags will be placed in front of the home or business whose address is provided. These will stay there for 48 hours.

For those who want to know who they were flagged by, $5 can be paid to the VFW so the culprit may be revealed. The fundraiser will be running until November 11.

Post 2618 did the fundraiser last year after Marlow saw the VFW Post in Meridian do it. He got in touch with the Post Commander there and learned more about it.

“I thought we could give it a shot,” Marlow said of starting the fundraiser last year.

To start the fundraiser off, the VFW will flag a few businesses around town. J&B Tile, US Lawns, Smith Jewelers and 51 Gun and Pawn have already been flagged.

“That gets the ball rolling,” Marlow said.

The cost of flagging a home or business pays for two wreaths for Wreaths Across America.

Marlow said the fundraiser has a positive effect on the community.

“It’s fun and it gets a lot of community involvement,” Marlow said. “It’s fun for the Post and generates some focus on the VFW and focus on our support of Wreaths Across America.”

No individuals have been flagged yet.

Marlow said there was a lot of participation in the fundraiser last year.

“We actually had people that had wanted to flag others beyond Veterans Day,” Marlow said. “And they still wanted to donate. We could have went year-round.”

Because of how much interest there was last year, the fundraiser began in July.

“We started earlier because of this,” Marlow said.

Riverwood Funeral Home is now a designated location for Wreaths Across America, so Post 2618 can raise money for wreaths to be placed on graves there.

“Now we can do more things at home,” Marlow said.

Marlow hopes the fundraiser raises awareness for veterans in the community.

“I want them to be more aware of our veterans and veterans programs, along with the services that the VFW provides for our veterans,” Marlow said.

Cases jump to 519 in county

The number of COVID-19 cases continues to surge across Lincoln County and across the state. As of July 10, Mississippi... read more