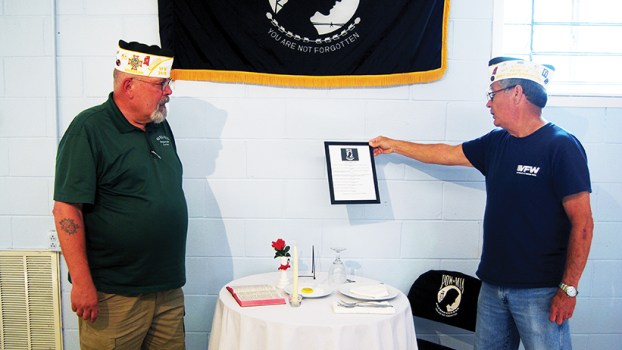 Photo by Brett Campbell VFW Post 2618 Post Commander Greg Marlow listens as Post Quartermaster Tommy Allison reads a tribute to military personnel who are prisoners of war or listed as missing in action. The POW-MIA table at Brookhaven’s VFW symbolizes veterans’ hope to see prisoners and the missing returned safely to their homes.

Brookhaven Veterans of Foreign Wars 2618 Post Commander Greg Marlow wants that to be known. Post 2618, known better locally as the Capt. Danny D. Entrican Post, was recently recognized as All-American — a national honor that posts work hard to achieve — and Marlow doesn’t want people thinking it was all his doing.

“He has done a lot,” Post Quartermaster Tommy Allison said.

A press release from the VFW national headquarters in Kansas City credits Marlow as having achieved the All-American status, stating that post commanders must meet strict requirements of exceptional leadership, authentic accomplishment in membership growth and strong support of core VFW programs.

But it was the combined effort of local members that brought about the honor.

Over the course of one year, a post has to have completed a veteran and military support fundraiser; present candidates for Voice of Democracy and Patriot Pin awards; nominate and award three teachers of the year from area schools — elementary, middle and high school; conduct a poppy fundraiser on Memorial Day; and maintain their membership 100%, adding to it as much as possible. Only then can a post be considered for the award.

The VFW’s 6,000 posts are divided into 12 divisions, based on membership size. The top 25 posts within each division are named All-American posts. Post 2618 was one of 673 posts in Division 8 this past year.

The post will advance to Division 7 this year, due to its membership growth — 111.92% of its previous membership total.

“Being a member is really important,” Marlow said. “It’s great if you can come attend meetings and other functions, but we understand life. Just be a member.”

A veteran of any war fought on foreign soil can become a member for dues of $35 each year, of for a lifetime fee, based on the veteran’s age. National membership is more than 1.5 million, and needs to maintain at least 1 million members to keep its lobbying voice in Congress, Marlow said.

“Right now, one-third of members are World War II vets nationwide,” said Marlow. These individuals are dying, and new members are needed to join the ranks, he said.

“Be on the roll,” said Marlow. “It means more than you think.”

Being named All-American due in part to its increase in membership also helps with recruiting new members. People want to join an organization they see growing, Marlow said.

Growth has been a struggle recently, however. With social distancing and other restrictions from COVID-19, Marlow said two of the three most recent meetings were canceled, and the third was very abbreviated. Tuesday night’s meeting was to be abbreviated, as well.

“But we’re going to make it through,” he said.

Marlow, Allison and awards chairman Lloyd Wilson are already planning for October’s Open House, where new memberships are the focus and raffle prizes will be awarded for tickets sold from now until then. Any post member can provide more information on the raffle and sell tickets.

At 121 years old, the VFW is the nation’s largest and oldest major war veterans organization. The motto “No one does more for veterans” is one the members take seriously. The more members in a post, the more veterans the post is able to impact positively.

“It should be a goal of every post to make All-American,” said Marlow. “We set it as a goal and fell just a little short last year, but we made All-State for the first time.” “We’re considered a triple crown winner this year,” Marlow said, with the post honored at the district, state and national levels.

“My members did this,” Marlow repeated. “I just happened to be post commander when it happened.”

Rural internet access got a boost when the Mississippi Legislature voted last week on two bills to allocate nearly a... read more