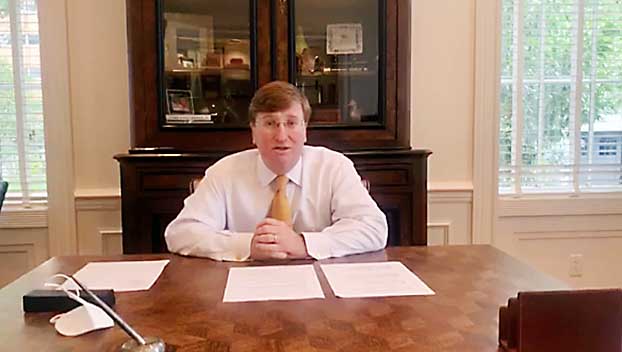 The bills vetoed were a bill that would grant the possibility of parole to some state prisoners who are currently ineligible, and a bill that would allow up to three felony convictions to be expunged from a person’s criminal record. The partially vetoed bill appropriated funding for K-12 and other related educational activities for Fiscal Year 2021.

Senate Bill 2123 was introduced in the Senate as “The Mississippi Correctional Safety and Rehabilitation Act of 2020.”

If passed, SB2123 would have made the following changes to existing state codes:

• Specify conditions for parole eligibility and provide limits on an inmate’s eligibility to petition his/her sentencing court asking to be made eligible for parole.

• Require the Mississippi Department of Corrections to set achievable case plans for inmates who are granted parole, and timelines to achieve those goals.

• Require positive votes from at least three members of the five-seat Mississippi Parole Board to grant parole to an inmate convicted of a violent crime after June 30, 1995.

• Require positive votes from at least four members of the MPB to grant parole to an inmate convicted as a sex offender.

• Provide victims or designated family members to address the MPB prior to a parole decision.

• Repeal the portion of the code which specifies inmates convicted of certain crimes must serve a minimum portion of their sentences before being considered for parole.

The code would have been amended to state “all persons who are convicted after June 30, 1995, of a violent crime … shall be eligible for parole after they have served … 50% of the sentence or sentences imposed by the trial court.”

All persons convicted after that date of a non-violent crime would be eligible after serving 25% of their sentence or sentences. Inmates in both categories are required to have hearings before the board prior to being granted parole.

The amendment also granted that “an offender who has served … 25% or more of the sentence or sentences imposed by the trial court or 10 years, whichever is less, may be paroled by the parole board if the offender has been authorized to be considered for parole by the sentencing judge or … the senior circuit judge.”

The bill would not grant parole to those whose sentences specify that they cannot be considered for parole.

Rep. Vince Mangold, Rep. Becky Currie and Sen. Sally Doty, all of Brookhaven, voted against the bill in its final form as sent to the governor.

House Bill 658, as sent to the governor, would have increased the number of felony convictions that could be expunged from a person’s criminal record from one to three. Doty and Mangold voted for the bill, while Currie voted against.

Gov. Reeves said in a lengthy Facebook post that he “had to veto House Bill 658 and Senate Bill 2123. The proponents call these criminal justice reform bills. I’ve been in favor of significant criminal justice reform bills in the past. I’ve helped make sure they become law. In fact, I signed a different one … that helps provide for better reentry into society after imprisonment. I’m generally sympathetic to the arguments. These individual bills go too far … We can’t have career criminals walking around with no records. The law enforcement community that I spoke with agreed. The same goes for Senate Bill 2123 — well-intentioned but too far.”

House Bill 1700 was introduced as Department of Education Appropriation. Local lawmakers Currie, Doty and Mangold voted in favor of the bill in its final form, as presented to the governor.

Reeves said his partial veto was for “the bulk of the education budget,” in the same Facebook post.

“The legislature voted to cut a teacher pay program by $26 million … 23,157 Mississippi teachers would get money that they’ve earned taken out of their pockets,” Reeves said.

Reeves indicated that few people — including many who voted for the bill — were aware of the cut prior to final review of the bill in the governor’s office.

“It was done quietly, without much or any conversation. Pretty much nobody in the legislature or education community knew about it until we discovered it in our bill review process … and raised the alarm. We have to veto this so that they can come back and fix it — otherwise 23,157 teachers will get a pay cut.”

Reeves said this was not a cut to save money, but a moving of monies into a different fund.

“I want to be clear: The legislature did not cut this teacher pay program … to save money. They moved it into a different fund that gives administrators control over it. That fund increased by $40 million. The philosophy is: it should be redistributed throughout so that everybody gets a small piece, rather than rewarding success,” said Reeves.

“Many other legislators have said they had no idea they were voting to cut this pay,” Reeves continued. “I think it’s probably a mix. It definitely never got a real debate.”

In Mississippi, the governor must veto a bill within five days after it is sent to his desk by the legislature or it automatically becomes law. The time is extended to 15 days for bills presented within the last five days of a regular session or after the session adjourns.

Reeves said he is aware the legislature can do just that.

“The legislature has a chance to come back and override my veto — locking in a teacher pay cut. Or they can sustain it and fix this,” Reeves said. “I suspect most legislators didn’t realize that they were voting to cut teacher pay, and they will fix it.”

Until a special session is convened following COVID-19 quarantines for many legislators, Reeves said, the department of education will continue to operate on authority from the governor’s office, backed by an opinion from the office of the attorney general.

Due to the continuing rise in COVID-19 cases statewide, the Mississippi Department of Public Safety has made the wearing of... read more