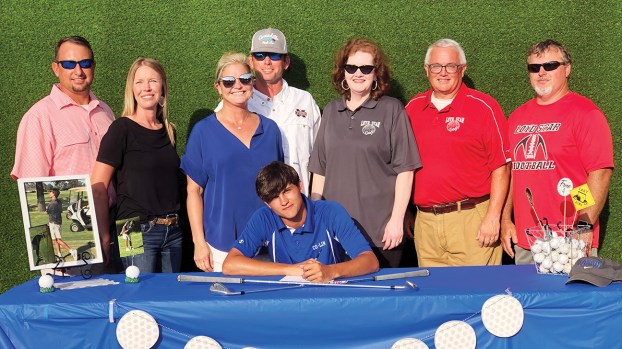 A Daily-Leader All-Area selection in both basketball and baseball previously in his career, Loyd Star alum Reese DeHart is trading his high tops and glove in for a set of clubs as he recently signed a letter-of-intent to join the Copiah-Lincoln Community College golf program next season.
It’s a family tradition for DeHart, whose mother Tammy Williford played softball at CLCC while his father Blair was a member of the Wolves baseball team.
A lefthander who played guard for coach Seth Britt on the hardwood and a variety of positions for coach Jared Britt on the baseball diamond, DeHart will now focus his efforts on growing his golf game.
CLCC golf coach Allen Kent sees a solid piece for his program in DeHart as he’s recently taken over the Wolves program following the retirement of former coach Craig Hennington.
“We’re looking forward to having Reese join us,” said Kent. “He’s athletic and has the potential to put up some good scores. We’ll get him stronger and really get him on a solid practice regimen that should help his all-around game.”
As a senior hooper, DeHart was one of the leading scorers for the Hornets. His outside shooting touch earned him All-Region honors.
A left-handed pitcher and infielder, he was also part of some big wins for Loyd Star baseball, including being a freshman on the state championship team in 2017.
The husband and wife duo of Chris and Lydia King have coached DeHart in golf and have seen his game improve on the links first hand.
DeHart hit his first career hole-in-one while playing with the Kings at Brookhaven Country Club on the day he signed with the Wolves. He aced hole No. 17.
“Reese is going to be a great addition to the Co-Lin golf team,” said Chris King. “He has power off the tee box and a very good short game. He is the type of athlete that will put in the hard work to become a better golfer.”
King’s wife Lydia echoes his compliments of DeHart.
“Reese is an amazing athlete with great talent,” said Lydia King. “He is a lefty that has natural abilities and I know he is going to be an asset to Co-Lin.”