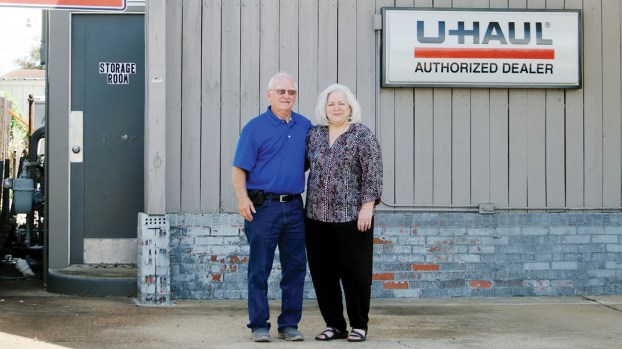 Photo by Gracie Byrne Chester and Mary Foster, the former owners of Foster’s on the corner of North First Street and East Monticello Street, have retired. He sold his business to community developer John Lynch.

Chester and Mary Foster, owners of Foster’s, have sold their store with plans to retire.

Foster has run the family business for the past 34 years. His father opened the store in 1962, and he ran it for 26 years before he bought the business.

“I bought it and ran it ever since,” Chester Foster said.

He ran the business with the help of his wife.

“And I’ve been his partner,” Mary Foster said.

“And that’s what it is now,” Chester Foster said.

Foster’s has been run as a convenience store for the past 15 years after the couple converted it.

“Bill Albritton remodeled it,” Mary Foster said. “He did a great job.”

Around the same time, the couple purchased the lot behind the store and built 57 mini storage units. Foster’s also serves as a U-Haul dealer for the area.

“I’ve been a U-Haul dealer for 33 years,” Foster said. “I’ve been in the top 10 for Mississippi several times and in the top 100 for the whole company three times.”

“It kinda feels like a funeral, it does,” Mary Foster said. “But we’re all good. The right person’s got it and it’s gonna be good.”

Mary said she enjoyed working with her husband to run their business.

“It’s been good, I knew my limits,” Mary Foster said. “We worked all day long. If this table could talk, it would tell you a lot.”

The biggest thing the couple will miss is their customers.

“There were several of his friends that came everyday, and he knows everybody and they know him,” Mary Foster said. “We’ve had great customers.”

The relationships they made are ones that aren’t taken lightly.

While the couple put the work in to make their business blossom, Chester gives all the credit to God.

“I would give all the credit to the good Lord,” Chester Foster said. “Without Him we’d have nothing. He blessed the Foster family, we give Him all the credit.”

The store is important to the couple because it’s their home away from home.

“We absolutely love downtown Brookhaven,” Mary Foster said. “I was born here, we both were. We moved away for a little while, but the majority of our lives have been here.”

The couple actually met at the store, believe it or not.

“I used to live up there on the corner, in a big yellow house,” Mary Foster said. “My parents had eleven children. We didn’t have a car, and so I walked. I walked down here and that’s where I met him. I didn’t have to go far.”

They both knew the other was special to them.

They have been married for 53 years now. The couple has two children together; Mike, 53 and Robin, 48. They have eight grandchildren and two great grandchildren.

“We knew one day we would retire,” Chester said. “We wanted the right person to get it, we’ve had a lot of people that came in and wanted to buy it. It just wasn’t the right time. I wasn’t comfortable with it. We prayed one day that someone would come along and keep the Foster tradition going. God sent Johnny Lynch to buy it. And to go along with the Foster name he hired two people whose last name is Foster.”

Everything will be kept as is for now.

With the outbreak of COVID-19, the Foster’s had sensed a change needing to be made.

“When the pandemic hit, Chester was down here by himself for two weeks by himself,” Mary Foster said. “I think God told him it was time to go. He took a picture of the street and there was nobody on it. He had lots of time to think, and God convicted him. He told me he was ready to go.”

Their plans are to spend time with their family and travel once COVID-19 restrictions lighten.

“We just want to stay at home and enjoy life and each other,” Mary Foster said. “It’s a whole new chapter.”

For the couple, running their business never really felt like work.

“It’s been a great ride, I couldn’t have asked for any better,” Chester Foster said. “It’s been a blessing to us and the Foster family.”

He is training the new workers this week. The final paperwork was signed Friday.

“We didn’t get our miracle, but we got our hallelujah,” Mary Foster said. “And we’re comfortable.”

Zach Kilpatrick feels that the more he learns, the more he realizes he doesn’t know, even though he’s earned the... read more