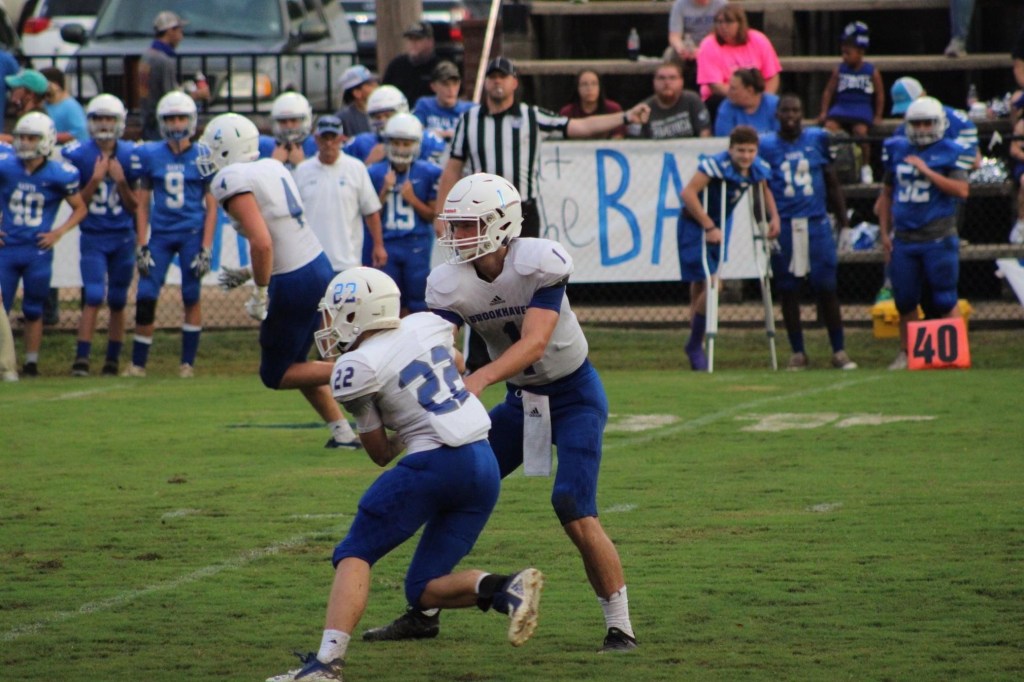 Photo by Angela Ritchie Junior quarterback Tyler Fortenberry hands the ball off to junior running back John Rivers Brown Friday night for Brookhaven Academy Cougars. Rivers ran for a pair of scores while Fortenberry scored three times in a 35-7 win over Sylva-Bay Academy.

The Brookhaven Academy Cougars (1-0) spotted Sylva-Bay Academy (0-1) an early 7-0 lead Friday night in the MAIS football opener for both teams.

After that is was all BA as the Cougars rolled to a 35-7 victory in Bay Springs.

Sylva-Bay got on the board with 5:24 remaining in the first quarter as sophomore quarterback Paxton Brewer found eighth grade running back Malaki Page behind the BA defense on a 61-yard touchdown pass.

On their first drive of the game the Cougars had marched into the SBA red zone before having a field goal attempt come up empty.

The Sylva-Bay touchdown came on a 3rd-and-9 play.

There wouldn’t be many more highlights for the Saints the rest of the night as the Cougar defense pitched a shutout from that point forward.

On the following drive BA tied things up on a 13-yard TD run by junior John Rivers Brown.

The Cougar offense started the series at midfield after a big kickoff return by Gavin Brogden.

A senior playing his first season of football, the athletic Brogden made a team high seven tackles including one for a loss while defending one pass.

A pass from junior quarterback Tyler Fortenberry to his sophomore brother Trevor got BA within scoring distance on the drive.

On the ensuing BA possession, it was another big gain from Tyler to Trevor that again got the Cougar offense rolling as the play ended on the Sylva-Bay 1-yard line.

On the first play of the second quarter Tyler Fortenberry punched it in from the one on a QB keeper. The Corey Case PAT kick was good, and BA led 14-0.

Trevor Fortenberry caught five passes for a team high 85 yards on the night.

Creating turnovers is something that BA head coach Ron Rushing and his staff have wanted to do more of in 2020 and that’s exactly what happened on the next Sylva-Bay possession.

A hit by senior Collin Waldrop jarred the ball loose and lineman August Sullivan pounced on it to give a hot Cougar offense the ball back.

Two long gains on QB-keepers by Tyler Fortenberry got the Cougars down to the Sylva-Bay 3-yard line. Brown capped the drive with a 3-yard TD run that made the score 21-7.

Brown finished the game with 15 carries for 76 yards.

SBA tried to get something going on their final drive of the half, but that attempt would end in disastrous results.

Trevor Fortenberry snatched an interception that he returned to the Sylva-Bay 15-yard line with 26 seconds until halftime.

With 3.3 seconds remaining in the period Tyler Fortenberry found his cousin Dylan Fortenberry in the back corner of the end zone for a 7-yard TD pass.

Case knocked in the PAT and BA led 28-7 as the early Sylva-Bay lead felt like a lifetime ago.

The lone score of the second half was an 8-yard pass from Tyler Fortenberry to his brother Trey Fortenberry in the third quarter.

The Sylva-Bay defense didn’t have much success getting to Tyler Fortenberry as the Cougars offensive line kept a clean pocket all night.

He finished 20-of-22 through the air for 217 yards and two scores. He also rushed 15 times for a team high 82 yards and another touchdown.

Linebacker Easton Boyte finished with 5.5 tackles including one for a loss. Gage Brown and Jalen Huffman had 4.5 tackles each and Rob Johnson recovered a fumble for the Cougars.

“We played well for the first game considering the field conditions,” said Rushing. “They had been getting rain all week and the field was saturated. Credit to our offensive line for not letting that affect them and doing their job. Receivers caught the ball and Tyler was on the money with his throws all night.”

The BA defense held Sylva-Bay to under 150 yards total offense as the Saints got most of their yards on the night from the Paige touchdown catch and a long run when the Cougars only had nine players on the field.

The overall speed on the defense has improved with the addition of Brogden and Trevor Fortenberry to the unit.

“For Brogden to be playing his first football game since he was in sixth grade, you would never know it,” said Rushing. “He was physical and made some great reads on where the ball was going. The same thing for Trevor on defense and he ran some great routes offensively.”

The Cougars make their home debut Friday against the Amite School Center Rebels. ASC had been scheduled to play Silliman Institute Friday, but that game was cancelled.

Fan attendance will be limited as Gov. Tate Reeves signed an executive order earlier this month that limits only two fans to be allowed in per athlete or participant.