Area XC season is off and running 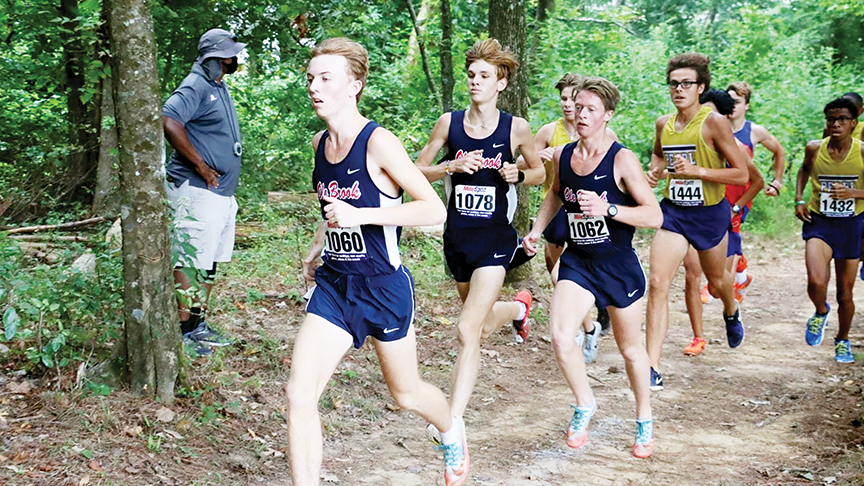 Photo by Terri Mabile The Brookhaven High cross-country trio (from left) of Sam Arnold, Jake Thompson and Grayson Childress run closely together Saturday in Madison. All three student-athletes are juniors and a big reason why the defending state champion Panthers are 5A XC favorites again.

Two weeks into the start of the 2020 cross-country season and one thing is already as clear as the nose on your face — the Brookhaven High boys are heavy favorites to repeat as MHSAA 5A state champions.

Mississippi Mile Split has them tabbed as the top team in the state — regardless of classification — in an unofficial ranking put out by the website. BHS is coached by Shannon Knott.

The first two weekends of the season have seen the Panthers clean up on the podium as they won the Mississippi College High School Season Opener on Aug. 29 and the Madison Central XC Classic on Sept. 5.

The MC Opener is one of the biggest meets of the season as the race goes off in two separate flights with a gold division and a blue division.

Ole Brook won the boys’ gold division by beating out 6A Pearl High by 19 points. Junior Grayson Childress was top finisher overall with a time of 16 minutes and 59 seconds on the 5K course.

Saturday at Madison Central the Panthers took the top three spots in a 4K race with Arnold finishing first followed by Childress and Thompson. Stewart and Kellum were tenth and eleventh overall respectively as BHS once again edged out Pearl for the team title.

Spring, Castillo and Leake of West Lincoln were the top three finishers overall in the second flight race in Madison. Loyd Star senior Will McCullough (16:22) finished eighth overall in the same event while Logan Hux of Wesson was the top Cobra runner with a time of 17:05.

Jackson Hedgepeth was the top middle school boy finisher for BHS in both meets. Hedgepeth was 11th out of 138 runners at the MC race and seventh overall in a two-miler at Madison Central.

The Brookhaven High girls’ team is also a strong program with statewide recognition as they’ve been 5A runners-up for three straight seasons.

In the race at Mississippi College the team finished fourth overall and then were the second-place finishers at the race hosted by Madison Central.

Saturday at the Madison meet it was eighth grader Scott who was the first finisher for BHS, tenth overall. She was closely followed by Stovall, Slay and Summers.

Three-time defending 2A state champion Aubrey Britt of Loyd Star was the 12th overall finisher at the Mississippi College race in the gold division with a time of 22:43. Sophomore Shannon Moore also competed for LS in the race.

In the blue division race at Mississippi College freshman Madelyn Spring of West Lincoln was the sixth-place finisher with a time of 26:48. Alexis Johnson and Alaina Mathis also ran for WL in the event.

Other middle school runners from the area that raced in Madison were Loy Star athletes Avery Sellers, Ady Locke, Josie Breakfield and Ainsley Gennaro. Competing from Brookhaven High in the same event were Evie Bowman and Eva Mason.

Mask requirement among COVID-19 guidelines released by MHSAA for…