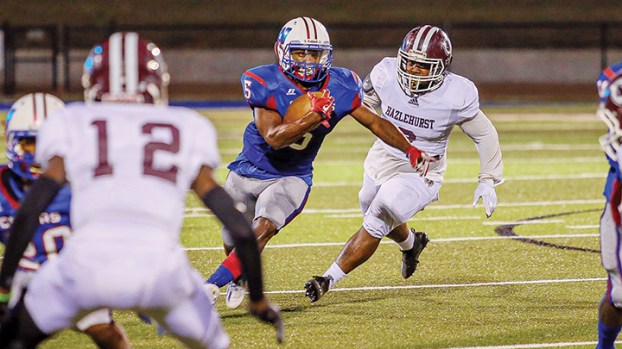 Photo by Lucas Calvert Wesson senior running back Jason Edwards knifes through the Hazlehurst defense Friday night in Stone Stadium. The Cobras are back at home again next week as they host Lawrence County.

The Wesson Attendance Center Cobras saw an early 27-point lead evaporate Friday night as the Hazlehurst Indians rallied late to take the Cobras’ home opener, 30-27. The win moves the Indians to 1-2 on the year and hands Wesson their first loss on the season, making them 2-1.

“I always say you learn a lot more from a loss than a win,” said Wesson head coach Jeremy Loy. “We got a little high on ourselves, and we’ve learned that if you quit playing, it can turn into a ballgame…our guys learned that lesson tonight.”

The Cobras set the tone for the first half with a stellar seven-play, 65-yard drive on their first possession. Quarterback Will Loy was perfect on the quick scoring drive as he connected on three-of-three passing attempts. The drive was capped off by a five-yard rush from senior Jason Edwards.

Wesson immediately turned around and recovered an onside kick to regain possession. Just three plays later Loy scrambled to his left and dropped a dot to senior Antrelle Sims for a 45-yard toss and catch score. The Preston Lee extra point put the Cobras up 14-0 with 7:27 remaining in the first quarter.

Both defenses dig in for the remainder of the quarter, but Wesson was back on the board in the second, taking advantage of muffed Hazlehurst snap, setting up a short field. Three plays later, Edwards found the end zone from five yards out to push the Cobra lead to 21-0.

The Indians punched pack on the ensuing drive with a 50-yard run from Cameron Hawkins. The run put Hazlehurst in the red zone and one play later, Patrick Bozeman plowed his way in. The two-point conversion failed, making it 27-6, a score that would hold through the half.

Hazlehurst was first to receive in the second half and on the second play from scrimmage, quarterback Ashton Fair connected with Doug Nelson for a 40-yard gain to Wesson’s one-yard line. Fair called his own number for the Indians’ second score of the night.

After a pair of punts, the Indians were back in possession and capitalized on big plays. Fair hit Hawkins for a 64-yard touchdown, and after a third failed two-point conversion, Wesson’s lead was cut to single digits, 27-18, with 1:13 remaining in the third.

Just before the end of the third quarter, the momentum pendulum swung even further into Hazlehurst’s favor with a fumble recovery at Wesson’s 41-yard line. The Indians strung together a seven-play drive that ended with another touchdown run by Fair, making it 27-24 Wesson with just 8:15 to play.

The Cobras were forced to punt after a big sack on third down on the following drive. Hazlehurst took over with 3:20 to play and manufactured a six-play, 81-yard drive that once again saw a huge play from Fair to Hawkins. This one, a 52-yard pass that was caught on a tip, put the Indians at Wesson’s one-yard line. Hawkins capped the drive with a run and put Hazlehurst on top for the first time with just 1:10 remaining, 30-27.

Wesson marched down the field on the final drive of the night, but the Indians made a four-play stand from their own 13-yard line to seal the win.

The Cobras are back home at Stone Stadium on Co-Lin’s Wesson campus next week as they host Lawrence County, while the Indians travel to Newton to face the Tigers.

“We just have to execute better, we had some penalties pull us back that hurt us in the second half,” said Loy. “Hazlehurst did a heck of job coming back, but we gave them a lot, but we are going to fix that.”