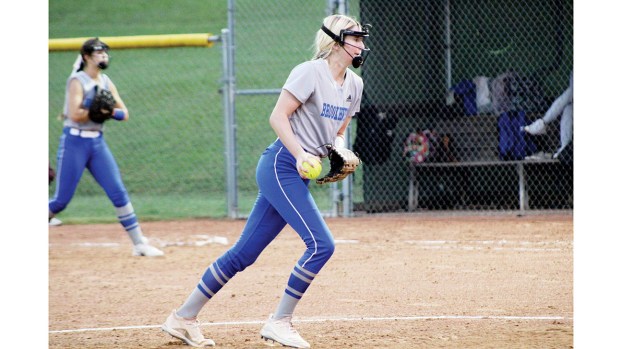 Photo by Patrick Murphy Brookhaven Academy junior pitcher Emily Claire Felder prepares to deliver to the plate Monday against Cathedral School. Felder struck out 12 for the Lady Cougars in a 3-0 win.

The Brookhaven Academy Lady Cougars (15-9-1) ended their District 4-4A schedule Monday night with a 3-0 win at Cathedral School in Natchez.

Junior pitcher Emily Claire Felder went the distance to get the shutout as she struck out 12 in seven innings. Felder gave up three hits on 112 pitches.

“Emily’s rise-ball was very effective as an out pitch and she also moved the ball in and out well,” said BA head coach Becky Flowers.

Felder has been doing the lion’s share of work in the circle since the beginning of September as senior pitcher Madi Smith was forced out due to an injury.

The win snapped a three-game losing streak for BA as the team had faced some stiff competition in Simpson Academy (21-4-1), Parklane (21-2-1) and Silliman Institute (26-5) before facing Cathedral.

Silliman finishes first in the district after beating BA 12-4 back on Sept. 7 and 3-1 10 days later.

The MAIS 4A South State Tournament begins Saturday at the Magee Sportsplex in Simpson County. Hartfield Academy is the opening round opponent for BA at 10 a.m.

A win moves them on to most likely face Simpson Academy in a 2 p.m. game.

The tournament concludes Monday with the champion being crowned that afternoon.

Losing Smith in the circle was a blow to BA and not having her in the field also caused some reshuffling for Flowers defensively.

Standout junior centerfielder Madison Moak was moved up to play shortstop as the combo of juniors Bailee Goodson and Abby Grace Richardson slid over from shortstop to third base. Goodson and Richardson also split time behind the plate catching.

Monday against Cathedral BA was able to scratch out four hits to drive in their three runs. Felder and Kensy Covington led the offense with a double each.

Richardson leads the BA offense with a .607 average and nine home runs. She’s driven in 22 runs which is second on the team behind Felder with 26 RBIs. Moak leads the team with 40 hits on the season.

The expectation all along was for the top half of the lineup to power the BA offense, but Flowers wants to get more production out of the later hitters in the order.

Adams batting eighth against Cathedral and getting a hit while also driving in a run was a good start towards that end.

Silliman, Simpson, Hillcrest Christian and Brookhaven will all be favorites in the tournament this weekend. The top four teams qualify for the 4A state tournament that starts Oct. 3 in Magee.

The MAIS 4A North State is happening simultaneously in Cleveland this weekend.

The win by Loyd Star Friday night at Ethel is the kind that Hornet players and coaches won’t soon be... read more