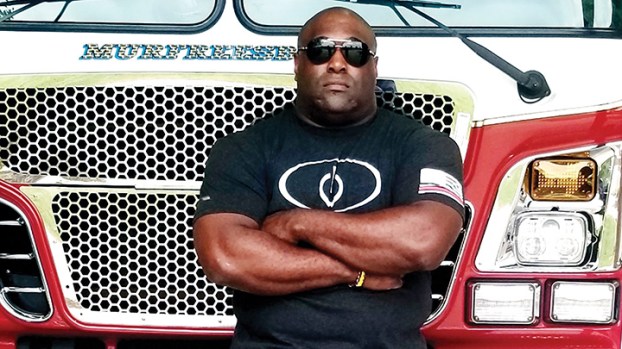 Photo submitted Brookhaven native Renard Brown — a full-time firefighter for two departments in Tennessee — has a line of clothing meant to encourage first responders, called Off Duty Apparel. The company’s motto is “Never Off Duty.”

A firefighter and Brookhaven native is advancing his clothing company aimed at first responders.

When Brookhaven High School alum Renard Brown played running back for Panthers football in the late 1980s and early ’90s, he knew what he wanted to do — keep playing football.

While working on a degree in public administration with a minor in sociology at The University of Mississippi, Brown played running back for the Ole Miss Rebels — until he injured his knee twice and moved to defensive end. After graduation, he moved to New York and tried to play for the Albany Firebirds, but a third knee injury just before his first season decided things for him. Football was no longer the plan.

Working both jobs keeps him busy, but not too busy to attend his kids’ sporting events or to work on his other pursuit — designing and producing apparel for first responders.

Off Duty Apparel is the company founded by Brown after he had been looking at some t-shirts designed for first responders and thought, “I can do this.”

“I had been in fire service probably 10 years and had never, ever bought a fire fighter tee shirt,” Brown said. “I didn’t have any, other than my job shirts.”

The company’s motto, “Never Off Duty,” came from Brown’s own experience and those of other first responders such as his wife, a nurse practitioner.

“We’re never off duty. My kids play sports all the time, and it’s nothing to be at a ball game and be asked to check on someone,” Brown said, saying it’s natural for people to look to men and women they know to be fire fighters, law enforcement or medical personnel for help in certain situations.

“Even on your day off, friends and family always have questions,” Brown said. “We’re never off duty.”

“I love the job. I appreciate the fact that when people are in some of the worst times, we try to help them through them,” Brown said. “We are cross-trained, in EMT/EMR, counseling sometimes, helping directing traffic. It keeps us tied to the community real close and I like the fact of the job like that.”

Brown created the clothing line in part as a simple symbol for first responders to be able to see each other when they are not on duty and have a point of connection without having to say a word.

“I didn’t want to design shirts that stuffed this in your face, like, ‘I’m a fire fighter,’ ‘I’m a police officer,’ ‘I’m a nurse or a doctor,’” he said, preferring something more subtle. He includes “thin line” flags on all of his shirts to help build unity and act as identity markers.

Brown — whose parents Larry and Ardella Brown, and brothers Larry Jr. and Lamareo still live in Brookhaven — said first responders really don’t want to wear t-shirts that draw attention to themselves from the general public, but do sometimes want to identify with and show support for one another.

“A lot of people call us heroes but we don’t think of ourselves as heroes. It’s our job. We do what we’ve got to do when it’s time to do it,” he said. “The clothing line makes us first responders proud of who we are. It says ‘I know what you’re going through’ and makes you proud to wear it.”

His products can be found at OffDutyApparelStore.com.

JA ‘Peel ’Em and Eat ’Em’ shrimp dinner is back