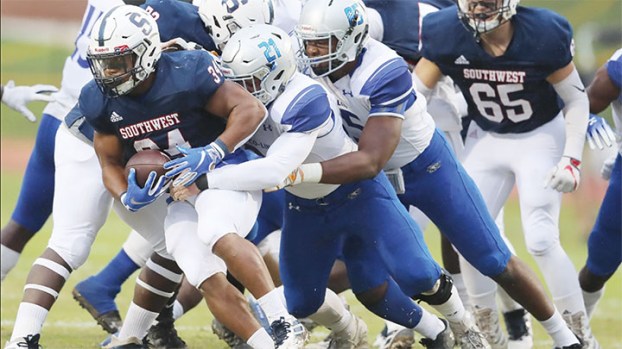 Photo by Co-Lin sports information Co-Lin and Southwest Mississippi C.C. closed out their 2019 seasons facing each other in Summit. They’ll kick of their 2020 campaigns Thursday night again in Pike County as the MACCC football season begins at community colleges around the state.

The delayed start of community college football begins this Thursday in small towns across Mississippi.

The state athletic association for two-year schools has rebranded itself the Mississippi Association of Community Colleges Conference (MACCC) under the leadership of second-year commissioner Steve B. Martin.

While the rest of the National Junior College Athletic Association (NJCAA) voted to move football to a spring season due to COVID-19, the MACCC has adapted and rescheduled to have football in 2020.

Any planning was further thrown a wrench when East Mississippi Community College opted out of playing football in early August.

The season that begins on Thursday will have teams playing a six-game regular season against only their division opponents. A state title game will follow the regular season as playoff participants have been cut down from four schools to only the two division winners.

The delay has allowed for a slightly longer camp, which was needed as schools didn’t have spring practice or summer workouts due to the pandemic.

Co-Lin head coach Glenn Davis was recently named as one of the newest inductees into the CLCC Sports Hall of Fame for 2020.

Entering his 17th season in Wesson, Davis has built a program with high expectations.

Those expectations weren’t met last season as the Wolves finished 4-5 and out of the postseason. Injuries were the biggest enemy as Co-Lin had many of their most talented players miss significant time while hurt.

“It’s definitely been different than any year in the past,” said Davis. “You see your sophomore grow during spring practice and then you turn around in summer and get so much done in regard to conditioning. Not having that to build on, it just means you’ve got to get a lot done while you can. The kids are resilient, though, and they’ve done everything we’ve asked of them.”

Every year is a rebuilding year in some form or other at the community college level, but two areas where the Wolves are strongest in returnees are offensive line and running back.

As a play caller, Davis has always had teams that first established the run and then used play-action to catch defenses slipping.

Last season, the Wolves could never get their ground game humming, as they didn’t break 1,000 yards as a team for the year.

Expect the running game to be a big part of the offense as the competition for starting quarterback has come down to the first game.

The passing game got a boost when sophomore receiver Malik Jones transferred to Co-Lin from Northwest Mississippi C.C.

A Crystal Springs alum, Jones has already earned an offer from the University of Memphis among others.

Southwest was the final opponent of the 2019 season for Co-Lin, a game the Wolves won 41-0.

Davis is 12-4 against Southwest in his career and the Bears are in their third year under head coach Tim Stowers.

Stowers is the offensive coordinator as the Bears run a triple-option offense that keeps the ball on the ground.

Third-year CLCC defensive coordinator William Jones and his staff know well of what to expect from the triple-option as they must keep their ends and linebackers played assignment-focused football.

“It’s just a style of offense that forces you to be disciplined,” said Davis. “Coach Jones does a great job of making sure those guys know where to go and what their job is going to be.”

Jones has some holes to fill on his unit — two of his starters from last season (Tyrus Wheat and Jordan Davis) were all over the field for Mississippi State in their win at LSU last week.

The linebacker group is the most experienced of the defensive unit.

The defense backfield also returns some experience in sophomore defensive back Jemaurian Jones. Jones transferred to CLCC from Southern Miss and initially signed with Louisiana Tech last spring after strong season for the Wolves.

Jones, a Brookhaven High product, chose to come back to Wesson for one more year at CLCC and opened his recruitment back up. He’ll be joined in the defensive backfield by his younger brother and fellow Ole Brook product Axavion Jones.

Kickoff is set for 6:30 p.m. Thursday at John I. Hurst Stadium in Summit.

Cole, Buffington are The Daily Leader Players of the Week