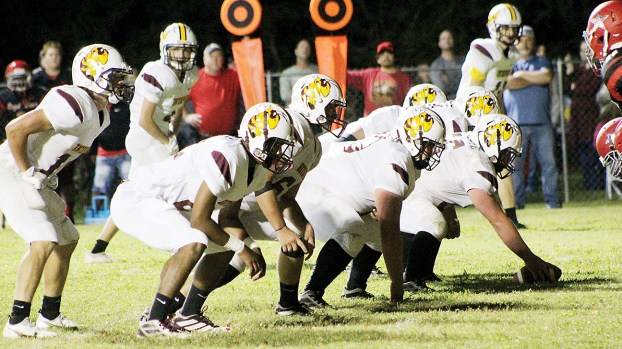 Photo by Cliff Furr Schools across the area and state began moving up their playing date this week from Friday to Thursday due to forecast weather from Hurricane Delta. At press time, Brookhaven Academy was the only school still scheduled to play Friday.

The intensification of Hurricane Delta in the Gulf with the possibility of heavy showers and storms on Friday night has caused schools all across the state to move up their scheduled football games to Thursday night.

The Region 7-2A showdown between the Bobcats and Cobras has been moved up to a Thursday night kickoff at 7 p.m.

Wesson (3-2, 1-0) is coming off a 52-0 whipping of West Lincoln. Four different Cobras scored rushing touchdowns in the win as the team combined for 188 yards on the ground.

Senior running back Jason Edwards rushed eight times for 112 yards and a pair of scores. Orlando Smith, Will Loy and Zevantae Stapleton all also had rushing TDs for WAC.

Junior linebacker C. J. Sutton made 13 tackles for the Cobras including five for a loss. Junior Collin McGowen added 12 tackles.

A suffocating Wesson defense only gave up 41 yards on the ground and eight through the air for coach Jeremy Loy and his staff.

Bogue Chitto (3-3, 1-0) head coach Gareth Sartin and his team got a thrilling 34-32 win over Amite County Friday night in Liberty.

It wasn’t just how the Bobcats won, but also where they won that needs to be noted. Since Amite County dropped back down to the 2A classification in 2011, a team from Lincoln County has not won in Liberty.

AC was a combined 16-0 against Bogue Chitto, Enterprise, Loyd Star and West Lincoln at home during that stretch.

And as Amite County was a 3A school for much of its history and did not play the then smaller schools from Lincoln County in the preceding years, one might be correct in assuming Bogue Chitto is the first team ever from Lincoln County to win on the Trojan’s home field.

BC trailed 20-14 at halftime as a goal-line stand just before the horn kept things inside a one-score game.

The Trojans went up 26-14 in the third quarter, but the Bobcat defense would only give up one more score on the night.

A Colton Frith to J. T. McCaffrey pass made the score 26-22 after an Owen Anderson conversion run.

As they’ve been know to do, BC recovered the onside kick after the TD. Frith hit Marshal Hart on a 6-yard scoring play that gave the Bobcats the lead for good.

On the first Amite County play after the Hart TD the Trojans fumbled. Anderson scored from 12-yards out to give BC its final TD of the night.

A county rivalry game and region matchup that will also serve as West Lincoln’s homecoming, the Yellow Jackets and Bears will also meet on Thursday night as to avoid wet weather.

Enterprise (1-2, 1-0) hopes to play the part of homecoming spoiler as they want to ride the momentum from their big win over Loyd Star last week.

The EAC defense set the one in their win last week as they only allowed 81 total yards for the Hornet offense.

Lawson Chemin made five tackles for the Jackets while Matthew Burns, Chris Walker, Joshua Paige and Brayden Polk had four tackles each.

Paige, an East Marion transfer in his first year at the school, was a disruptive presence as a defensive tackle.

Expect EAC to keep the ball on the ground as they rushed for 295 yards in the win over Loyd Star.

West Lincoln (2-3, 0-1) will look to get back on track behind their ground game and junior running back Enrico Price.

Price has rushed 84 times for 719 yards and eight scores this season.

That win two seasons ago came on a night when then sophomore running back Eric Birch rushed 12 times for 161 yards and four scores.

The sophomore duo of Lezeric Brothern and Bryce Ford led the Loyd Star defense with 10 and nine tackles apiece respectively against Enterprise.

After Thursday night Loyd Star only has one remaining regular season game at home — Oct. 30 against Bogue Chitto.

UPDATE: The Brookhaven Academy at Riverfield Academy game scheduled for Friday has been moved up to Thursday at 7 p.m.

The only school that had not moved its game up at press time in the area was Brookhaven Academy. That decision was out of the control of BA head coach and athletic director Ron Rushing.

The Cougar fans will be making a long trip to Rayville, Louisiana, as BA plays district foe Riverfield Academy.

They’d prefer to be taking the 130-mile drive in dry weather on Thursday night, but Riverfield has a junior high game scheduled for that date.

Brookhaven Academy (4-3, 0-1) is coming off back-to-back weeks against larger competition. The MAIS 4A Cougars first lost 39-7 to 6A Parklane and then last week dropped a 31-20 defeat at 5A Adams County Christian School in Natchez.

The Rebel defense shutout the BA ground game as the Cougars picked up just 33 yards rushing on the night.

Corey Sewell ran for 294 yards and three scores for ACCS.

Stopping the ground game of Riverfield will be the difference for BA Friday night.

The lone loss this season for RA is a 23-22 loss to Tri-County in the season opener.

It’ll be a Thursday kickoff for LC as they host South Pike in a big Region 6-4A matchup.

The game was tied 21-21 at halftime as Raymond quarterback Trent Singleton had a big night for the Rangers — 20-of-30 passing, 337 yards through the air, three passing scores and two rushing touchdowns.

Coach Jesse Anderson and his staff got 13 total tackles including four for a loss by freshman Ahmad Hardy against Raymond.

Hardy had two sacks and as a team the Cougars posted five total sacks in the win. Kannon Cato and Da’Quan Pittman also had an interception each for LC.

Kickoff in Monticello is set for 7 p.m.

Loy, Kees are The Daily Leader Players of the Week