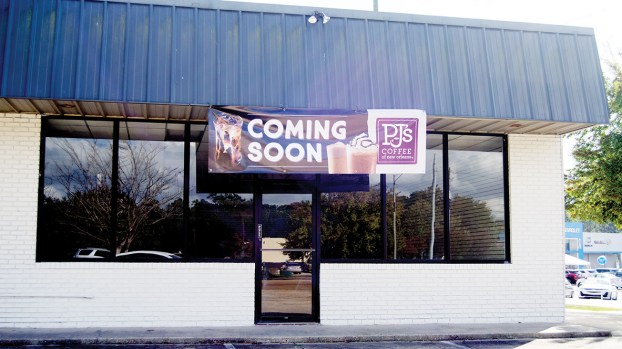 Photo by Gracie Byrne John and Angie Lambert of Brookhaven have leased the old Engravables building on Brookway Boulevard to open PJ’s Coffee.

A local couple will soon be opening a franchise of a popular coffee shop chain on Brookway Boulevard.

John and Angie Lambert of Brookhaven expect to open their franchise of PJ’s Coffee by Christmas— if not, then by the end of the year — at the old Engravables location at 930 Brookway Boulevard.

Originally from Amite, Louisiana, Lambert has been married to John for 20 years. She’s lived in Brookhaven for longer than that. They have four children all together: Carmen, Connor, Jessica and Logan.

Lambert has worked as an x-ray technician at King’s Daughters Medical Center for 16 years, but she knew she couldn’t do that for the rest of her life. So she started thinking.

“I was working in the ER, and I was looking for something different,” Lambert said. “I told myself, ‘I don’t think I can do this forever.’”

She thought about the things she knew well, and besides the medical field, she thought of coffee.

“I do know coffee though, that’s my favorite thing,” Lambert said. “What does Brookhaven need and what do I know? Coffee.”

Being from Louisiana, Lambert knew the PJ’s coffee brand. She went on their website and filled out the application. In 2018, she signed the franchise agreement.

At the time, there weren’t a lot of places to lease. They considered buying property, but felt unsure.

When the COVID-19 pandemic hit, Lambert’s job at the hospital became even more stressful. Around that time, they decided to lease a property rather than purchase one.

“I’m thankful I had this to look forward to,” Lambert said of her business. “God had a plan for sure.”

Once the couple started looking for a property to lease, the old Engravables building became available.

“It was almost like I waited for a reason. Nothing was quite right until now,” Lambert said.

PJ’s Coffee is based in New Orleans, and they’ve been in business for more than 40 years. The PJ in PJ’s Coffee is for founder Phyllis Jordan.

The company has over 100 locations with 10 of those in Mississippi. The Brookhaven location will make the total 11.

“We’re coming to Mississippi for sure,” Lambert said. “Coffee is a huge business, a huge industry. People that don’t drink coffee every day don’t realize how big of an industry this is.”

As for the Brookhaven location, Lambert says they’ll be selling more than just coffee.

The coffee shop will feature a seating area with couches and free Wi-Fi, along with booths and tables. Along with being able to walk in, the drive through will also be available by entering from Brookway Boulevard. Ordering through the PJ’s Coffee app will be available, too.

While hours have yet to be set in stone, Lambert will adjust that to the needs of her business.

“Most (PJ’s Coffee locations) are 6 a.m. to 8 pm,” Lambert said. “But whatever Brookhaven needs, we are going to try to do whatever we can.”

Lambert believes this will be a positive addition to the Homeseekers Paradise.

“It’s going to be different, and it’s going to be good,” Lambert said. “We’ve needed something like this here for quite some time. I can see the light at the end of the tunnel; it’s been a long two years. I’m scared but excited.”

The Lamberts hope customers make their shop a regular stop in their commute.

“It’s going to have that hometown feel,” Lambert said. “It’s not a big corporation coming in, people will see familiar faces. I hope to get some morning regulars to come in and drink their coffee with me.”