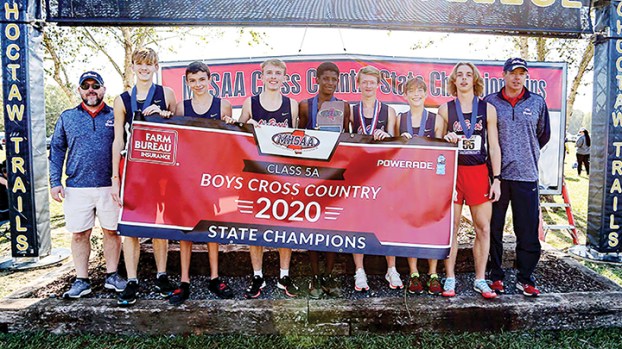 2 in a row! BHS Panthers repeat as 5A cross-country champions

It was a total team effort from everyone wearing an Ole Brook racing bib Saturday at Choctaw Trails.

That’s what it took for the Brookhaven High boys’ cross-country team to win the MHSAA 5A state team championship.

It was a second-straight title, but it didn’t come easy for the Panthers as they edged out their rivals from Saltillo High by a 29-36 score.

The top five finishers from each team are the ones whose scores count towards the point total and the top 10 was almost exclusively members of those two teams.

East Central senior Christian Balcer was the overall winner on the 5K course with a time of 15 minutes and 15 seconds.

Brookhaven High junior Grayson Childress (16:27) was the second overall finisher and was followed by Emerson Mansfield from Saltillo in third place.

The third Panther across the finish line was junior Trey Knott (17:05) in sixth place. He was trailed in seventh place by Saltillo junior Daniel Fair.

The Panthers took ninth and 10th place when junior Jake Thompson (17:19) and sophomore X’Zavion Stewart (17:36) finished ahead of another pair of Saltillo runners.

BHS junior Collin Kellum (17:56) came in 12th overall and freshman Wyatt Scott was the 39th finisher out of the 82-man field.

In 2017 the Panthers beat Saltillo to win their first team title. The next year the Tigers came back to beat BHS by a razor thin margin.

Last year the Panthers blew out the Tigers from Lee County and the rest of the field as they cruised to another title. This season BHS even went to Saltillo High and beat their rivals on Sept. 19 in the Saltillo Invitational.

BHS closes the season having not lost a race to a school from Mississippi in 2020.

“Saturday definitely wasn’t our best race of the season,” said BHS coach Shannon Knott. “It was possibly though our best team effort. Our guys will never quit and that’s what it took.”

Knott is assisted by Kevin Bower.

Lady Panthers finish 3rd in 5A

Just like their male counterparts the Ole Brook girls’ team has built a reputation as a title contender every year.

After finishing as state runners-up for three straight years to Saltillo the Lady Panthers finished third overall Saturday in Clinton.

“This has been a rebuilding year for our team with three members of the team in junior high and no seniors on the roster,” said Knott. “We’ll only have one senior next year and are looking for big things from this group.

Sophomore Ramie Stovall (22:06) finished in 15th place to lead the BHS contingent. It was the first state meet for Stovall after joining the team this season.

Long Beach distance running star Brooklyn Biancamano once again won the individual title with a time of 18:15 across the 5K course.

It’s all about Britt again in 2A cross country

As it’s often happened since she burst on to the scene as an eighth grader, Loyd Star junior Aubrey Britt... read more