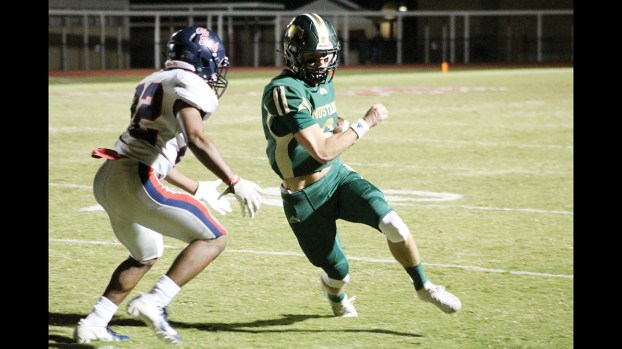 Photo by Cliff Furr West Jones quarterback Alan Follis and the Mustangs will play at Picayune Friday in their playoff opener. BHS will travel to play Pascagoula.

In the early going Friday night on King Field, the Brookhaven High Panthers (5-3) were trading shots with West Jones Mustangs (9-2) in the Region 3-5A finale for both schools.

When BHS failed to land punches though, the Mustangs kept slugging as they used their big play passing offense in racing out to a 44-13 win.

West Jones won’t begin the playoffs next Friday as the top seed from the region. That spot goes to Laurel who beat WJ 19-13 on Oct. 16.

After their win over BHS, the Mustangs are now the No. 3 seed and will play on the road Friday as will Brookhaven who is the No. 4 seed.

After one quarter West Jones led 10-0 as the Mustangs got their first touchdown on a 60-yard pass from senior quarterback Alan Follis to sophomore wideout Matthew Nixon. The 6-foot-3, 185-pound Nixon caught a short pass, made two Panthers tacklers miss and outran the rest to the end zone.

BHS responded and showed they can dial up a dynamic play when needed as junior quarterback Dre Ross went around the left end with 10:07 remaining in the first half and sprinted to the end zone for the first Panther touchdown.

On the ensuing drive it looked like the BHS defense had stiffened in the red zone to force a West Jones field goal attempt, the second time that had happened in the half.

However, a running into the kicker penalty took things from a 4th-and-6 to a 4th-and-1. The Mustangs picked up the first down and then Follis hit sophomore wide receiver Marlon Lindsey for an 11-yard TD pass.

From there on out the West defense was especially stingy as they pinned their ears back and brought a strong pass rush on throwing downs.

West Jones blocked a BHS punt and rerecovered on the 1-yard line with 3:33 left until halftime. Follis then scored on a QB dive.

Two minutes later the Mustangs got one final first half possession and again went to the air to claim a 31-7 halftime lead.

In the first half alone Follis threw for 235 yards.

BHS kept battling and got their second score when Ross hit Javonta Stewart on a TD pass late in the third quarter.

“They brought it to us, we didn’t bring it to them,” said BHS head coach Tucker Peavey. “We’re a few situations short from being good and we’re not there yet. This team is there, and they attack and come at you with a great group of seniors that are physical. We’ve got a lot of ninth and 10th graders going against a top three or four team in the state.”

In a back-and-forth barn burner, the Wesson Cobras toppled the Bay Spring Bulldogs in the first round of the MHSAA... read more