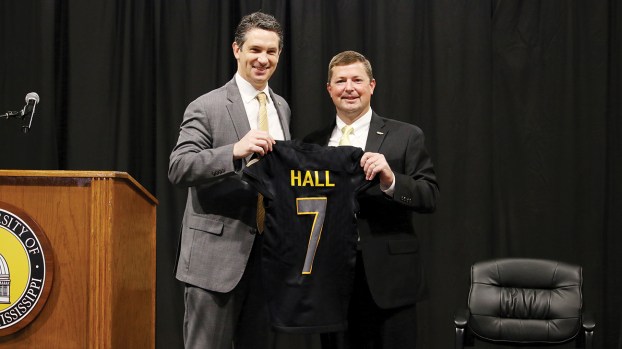 Hiring Hall hits all the marks for Southern Miss football

I’m also a fan of Southern Miss athletics as well as an alumnus of the school.

You can’t be a fan of Southern Miss unless you have thick skin. We’re the smaller program in a state with two passionate and sometimes deranged SEC fan bases.

Yes, we had a run of kicking their butts back when penny loafers and tight rolled blue jeans were en vogue.

That was back before coaches started recruiting by helicopter though and the team locker rooms at Alabama and Clemson had waterfalls and barbershops located inside of them.

Yes, I’ve been called a mustard buzzard by my friends who went to State.

An Ole Miss fan has never called me that phrase though. For them I guess Hattiesburg is just a place to stop for gas on their way to 30-A.

And I’m fine with all that — I’ve got some tough hide on me.

Personally, I’m the type that always roots for the underdog. I detest frontrunners or band wagon hoppers.

My brother is a State alum. I’ve watched enough MSU games with him to understand the misery that can plague that fandom. I’m sure that making fun of Southern Miss is some type of therapy for them.

So, this is being written from the perspective of a fan who is more than pleased with the job that USM athletic director Jeremy McClain did in hiring Tulane offensive coordinator Will Hall to lead the program. Hall was formally introduced as the new coach at a press conferene this week.

Will Hall is nothing but a born and bred winner.

It would be impossible to find a more desirable up and coming coach with stronger ties to the state of Mississippi than Hall.

From most accounts he was McClain’s number one target once the process began with Jay Hopson resigning after South Alabama beat the Eagles in the season opener.

Could Hall possibly come to Hattiesburg and turn the program around for 3-4 years before leaving for a bigger and better job — absolutely, but that’s the type of risk that Southern Miss has to take if they’re going to win football games.

I grew up in a family with just a few loose ties to Southern Miss. My maternal grandfather was an alum, but he’d gone to school there at night on the G.I. Bill.

When I was in high school my best friend’s dad took us to see a nationally ranked Texas A&M team play in Hattiesburg.

We sat in the upper section of M.M. Roberts Stadium and watched Adalius Thomas, Lee Roberts, Sherrod Gideon, Todd Pinkston and the rest of a USM squad that would finish 7-5 lose to a bigger, deeper team of Aggies.

I was hooked and had found the team I wanted to root for.

Head coach Jeff Bower was in his ninth season in Hattiesburg that year. He would go on to coach nine more seasons at his alma mater and finish with a career record of 119-83-1.

Bower went 14 straight seasons without posting a losing record. He was part of the football team at USM for 29 years as a player, assistant and head coach.

No one has ever done more for Southern Miss football than Jeff Bower and the way he was forced out by a bad president and an arrogant athletic director was wrong then and is still wrong now.

There are people today though — in 2020 — who still think that rehiring Jeff Bower will fix what ails USM football.

They wanted Bower rehired after his replacement Larry Fedora won a Conference-USA title and then split for the University of North Carolina.

They wanted Bower rehired after the awful Ellis Johnson experiment ended with one winless season.

They wanted Bower rehired after Todd Monken left for the NFL.

Bring back Bower they wrote on tweet replies, Facebook posts and online forums this year after Hopson quit and then his interim replacement Scotty Walden quit as well.

Man, can you all please give it a rest. Same for the people suggesting that McClain hire Hugh Freeze, Buddy Stephens or Steve Campbell.

Hire the best candidate that fits your program, your need and your budget.

That should be the mantra of every athletic director when they are shopping for a new football coach.

Hall checked all those boxes for McClain.

If you saw Will Hall play quarterback at Northwest Mississippi Community College, then you’ll never forget it.

In 2000, the Rangers were put on national probation for starting practice too early. They couldn’t play for a state or national title that year, both of which they were favorites to win.

NWCC tore through the community college ranks like a swarm of wet hornets that season.

Hall threw for 602 yards and nine touchdowns against East Mississippi. He threw for almost 4,000 yards on the season as the Rangers eclipsed 60 points in a game five times on the way to a 10-0 record.

The Co-Lin coaching staff should be applauded for holding Northwest to just 31 points in the season opener that year in Wesson.

Hall went on to play quarterback at North Alabama for Mark Hudspeth. He won the Harlon Hill Trophy as a senior which is the Division II equivalent of winning the Heisman.

He succeeded the legendary Bobby Wallace as head coach at West Alabama and won there. He moved within the Gulf South Conference and won at West Georgia.

His last two gigs have been as offensive coordinator at Louisiana-Lafayette and Tulane.

He knows what it takes to get players to buy into his vision. To buy into joining a program that doesn’t have all the bells and whistles that come with being in a Power 5 conference.

I don’t care if you’re coaching at Coahoma Community College or Florida State — the formula for a winning college football program isn’t much different.

You’ve got to be able to get talent on campus. It’s called recruiting, but it’s more than just sending letters or making calls. It’s selling them on your dream, building relationships and being able to identify hidden gems.

You can’t win with bad players, but you can lose with great ones if they aren’t bought in. Once you’ve got them on campus then you’ve got to have them aligned to the culture that you’re building within the program.

Scheme matters — but not as much as some people give it credit for. Army and Navy have whipped much more talented teams over the years using the triple-option and their effort.

Spread them out, use a power-based running game or mix it up — none of that matters if the guys in pads aren’t playing hard for their team, coach, school or brotherhood.

It takes a leader to put it all together and that’s what McClain has brought to Hattiesburg with his hiring of Hall.