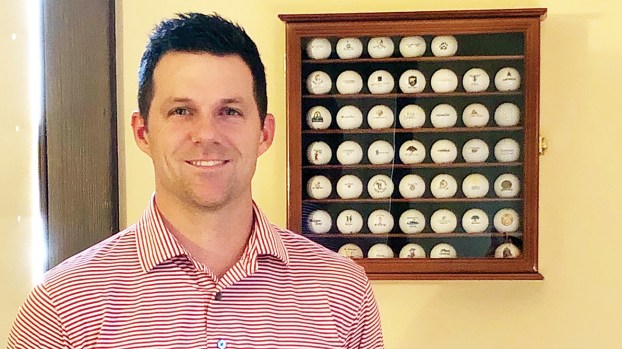 Photo Submitted Brookhaven native Craig Smith is now serving as a certified golf teacher at the Club at Ole Brook. Smith is offering lessons for members and non-members. To reserve a lesson call the club pro-shop at 601-833-6841.

The Club at Ole Brook pushing junior golf in 2021

Young, developing golfers won’t have to look far in order to work on their game in 2021 as The Club at Ole Brook plans to lead the way in growing the game locally.

Club general manager Jeff Henning has welcomed Brookhaven native Craig Smith on as a new certified teaching instructor. Smith grew up on the course — his boyhood home had a front door that opened on the No.8 fairway.

He’s certified by the United States Golf Teaching Federation and will now use his lifelong love of the game to help area golfers — old and young alike — by offering private lessons. One doesn’t have to be a member of the club to get lessons from Smith.

“I’ve had my certification since 2012,” said Smith. “I’ve kept it up but haven’t used it much. Once I heard that the club was doing some restructuring, I reached out to Jeff and talked about coming on to help. I’m loving it so far — golf is really popular right now in our area.”

That’s the same thing that area golfer Robert Byrd says when he talks about an endeavor he’ll begin in 2021 — a USSSA junior golf league.

The USSSA is big in Mississippi as a sponsoring body of baseball and softball. In other states they facilitate sports such as golf, volleyball and soccer as well.

Byrd has been tabbed to lead an area golf league that will allow junior golfers to grow their game in a competitive environment.

“We’re going to keep it local and play events at the Club at Ole Brook, Wolf Hollow and Percy Quin,” said Byrd. “It’s going to be for golfers from ages six to 19 and will be open to boys and girls.”

There are different junior golf tour circuits throughout the state. Many of them are for the more serious player who is seeking scholarship opportunities or a chance to move up in the rankings.

Byrd says the USSSA league will be about development and learning golf etiquette.

“I’ve had three sons to play high school golf and a lot of times kids don’t really play competitively against other people until they get to high school,” said Byrd. “Our events will allow a caddie so a parent can be on the bag helping their child improve their game while having fun and competing for a trophy. It’ll be affordable, too. Some of these bigger tournaments cost over $400 for a weekend. Ours will start at $50 for the 6 through 9-year-olds.”

For Henning it’s all about seeing golf being a shared experience among families.

“That’s what we want to see, families playing golf together,” said Henning. “Moms and dads and grandparents out playing with their kids and passing a love of the game down to the future generations.”

Byrd has a website that can be used to get more info about the junior league. Sign up is already open for the first event to be held on Jan. 23. The website is USSSAgolf.com/Mississippi.

“Since the pandemic started, I’ve seen more people playing golf than maybe any time I can remember,” said Byrd. “People wanted to get outside and move, and the golf course became a big part of that. I think we’d like to all keep that momentum going and use it to bring more kids to the game in this part of Mississippi.”