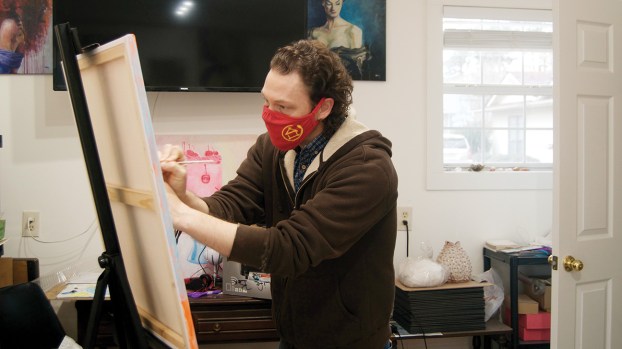 File photo Artist Derek Covington Smith works on a painting in his Brookhaven studio. Smith will host “21,” a virtual art show focusing on two decades of Mississippi artists, during the month of January.

Artist and educator Derek Covington Smith hosts “21,” a virtual art show focusing on the past 20 years for Mississippi artists.

With the outbreak of COVID-19, Smith and other artists have been unable to host in-person art shows. Despite that, Smith has still been able to host virtual shows, including his most recent show that will start Jan. 1 and end Jan. 31.

Dubbed “21,” the art show focuses on the art of Mississippi artists and what they have experienced in the past two decades. Smith appropriately has 21 artists featured from all over the Magnolia State.

“This is actually our second show,” Smith said. “When everything shut down, I was teaching classes but I always wanted to do the gallery here.”

The idea of a virtual art show didn’t seem achievable at first, but after brainstorming with a friend of his in Vicksburg, they were able to bring it to fruition.

“It became a distant idea and I wasn’t happy with that,” Smith said. “Now we’re just bombarded with people who want to be involved and we’re so excited about that.”

The very first virtual art show Smith hosted was “Hope” and was based on how Mississippi artists interpreted the word itself.

For the show, any mediums were accepted. Much of the work was in visual art, but wasn’t limited to painting and sculpture.

With the show being virtual rather than physical, this gave Smith a way to better benefit the artists involved.

“With me being able to build it virtually, I don’t have to charge the artist to enter,” Smith said. “I don’t take commission from everything that sells.”

“You’ll be able to contact the artist directly and links will be under the pieces.”

Smith found another way to add to the quality of the show due to it being virtual.

“The fun thing about this show is that I’m able to do it differently than I would in public,” Smith said. “I gave links to artists. That’s really important to me. I was also able to take audio and video submissions, so that’s woven in and out of the shows as well. Not only will you be able to read and see the artist’s work, but you can hear them tell their story as well.”

“We had good feedback on the last show,” Smith said. “The artists from that show wanted to do this one. The whole point is to keep Mississippi artists in the eyes of everyone and giving them an accessible platform to shine on.”

Lincoln County suffered limited damage from a storm system that moved through the area in the late night hours of... read more