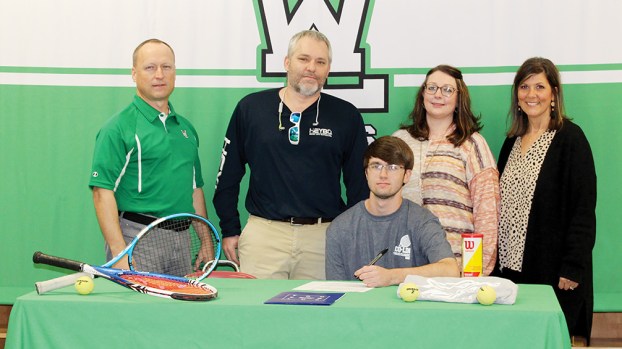 “Caleb is just a great all-around kid,” said West Lincoln tennis coach Karen Rogers. “He excels on and off the court as an athlete and a student. His year round dedication has definitely paid off and it’s been such a joy to coach him and get to play a small role in his future. Co-Lin is getting such an asset in Caleb and they’re going to love him.”

The 2020 high school tennis season was canceled by COVID-19, but in 2019 as a sophomore Myers was part of a West Lincoln team that won the region and saw him qualify individually for the state tournament.

Co-Lin tennis coach Dana Hale and her team have a beautiful, new eight-court complex that they call home. Hale has also announced the signings of Keegan Thurman of Lawrence County and Makiyah Adams of Terry High School along with Myers for the current recruiting class.

“Caleb is a student of the game and has really improved over the last couple of years,” said Hale. “He is a hard worker and very coachable. He has a strong forehand and moves well on the court.”