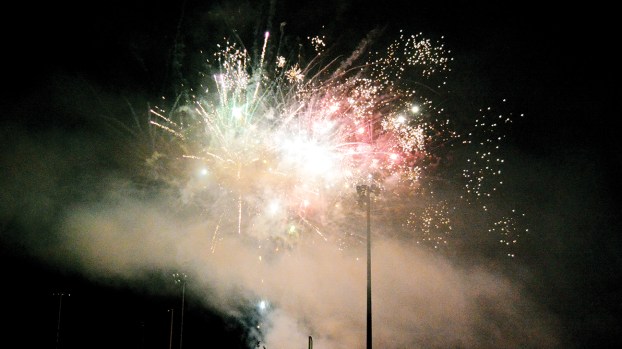 Photo by Gracie Byrne Lincoln Countians capped off their celebrations of the Fourth of July with traditional fireworks displays, like this one at the Lincoln Civic Center.

Animal shelter volunteer gives advice for pets during the holidays

Residents are advised to take caution while shooting fireworks and having pets outside.

Every year, people buy fireworks to pop so they can celebrate the New Year. One thing that inevitably happens is an animal becoming startled and somehow escaping its yard. Often time’s pets that escape their yards may end up being picked up and taken to a local animal shelter.

“It doesn’t happen a whole lot, but we have seen it though,” Adcock said. “It happens around Fourth of July and New Year’s Eve.”

The best option for any pet is to keep them away from the noise if at all possible. Make sure your pet has a tag and collar and that is it fastened properly in case they get out.

In the case that a pet does get loose and becomes lost, there are steps that can be taken to find them.

“They definitely need to have a picture available and then share that picture,” Adcock said.

Once the pet has been announced as lost, BARL can help the owner try to find them.

“We network that info within our group, so people in the network know that the dog is lost,” Adcock said. “Anytime an animal shows up, we’re going to hold them for a week to try and get owners to follow up with us.”

BARL will also post a missing animal to their Facebook page to try and find the owner.

“We’ll put things out on Facebook,” Adcock said. “If someone is missing an animal we’ll have them come identify them and try to reconnect them.”

Another option for pet owners is to microchip their animals.

“We always check for a microchip,” Adcock said. “If they can microchip their animals, that would be beneficial. It would be one of a kind to them.”

If pets can be brought inside without issue, Adcock encourages pet owners to create a calm space for.

“If they’re outside dogs, bring them inside,” Adcock said. “Maybe put on some music or turn on the TV. Play normal sounds to get their minds off of the noise. Play with them.”

A ThunderShirt could also benefit one’s pet. It fits tight on the animal to give them the sensation of being held, which creates a calming effect.

For anyone who is a new pet owner, being cautious will benefit the pet in the long run.

“If they just got the animal, there’s still a lot you may not know about them,” Adcock said. “Be aware if you have people shooting fireworks, it could affect them in a negative way.”

The Mississippi Highway Patrol will begin the New Year’s Enforcement Period on Thursday, December 31 at 12:01 a.m. and will... read more