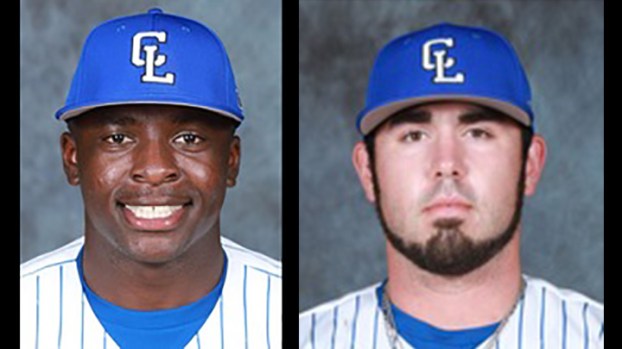 After nearly a year away, the Copiah-Lincoln Wolves were back on a baseball diamond Wednesday.

Co-Lin faced Southwest Mississippi C.C. in the season opener for both teams. In the first game, the Wolves jumped out to a 10-2 lead before holding off a SW comeback for a 10-9 win. In game two, the Wolves never trailed in getting a 5-1 victory.

CLCC has now won nine straight on the baseball field over their rivals from Summit.

Eighth-year head coach Clay Smith has had the expectation that his team would hit the ball well in 2021, but Co-Lin batters haven’t faced opposing pitching since March 9, 2020.

On that day the Wolves swept a doubleheader against Delgado. Soon after the 2020 season itself would be swept away as COVID-19 canceled the remainder of the schedule. Co-Lin was 11-4 when the season was called off.

Wednesday in the first inning of the opener, it was the long ball that got things going for CLCC.

Sophomore Marquez Hudson (Lawrence County) smashed a two-run home run to get the Wolves on the board. That was followed up by a solo homer by sophomore Hunter Richardson (Enterprise).

Richardson is in his first year in Wesson after playing at Jones College last season. The power hitting first baseman/designated hitter was The Daily Leader All-Area MVP his senior year at Enterprise.

On the day Richardson drove in four runs in the two games, he also smacked a double in the opener.

Rutledge is a large presence on the bump, clocking in at 6-foot-5, 215-pounds. Last season Rutledge struck out 21 in just over 17 innings of action.

Against Southwest, Rutledge struck out seven and gave up four earned runs on six hits over five innings.

Parker is an infielder who also pitches. He’ll be a starting pitcher this season for the Wolves and was a high school teammate of Rutledge at West Ouachita High outside of Monroe.

At the plate Parker was 3-of-6 on the day with five runs driven in and two stolen bases.

“It just felt good to be out there and to be playing against someone else,” said Smith. “I thought we played a clean game for the most part. Our pitchers threw a lot of strikes which is what we want.”

In the nightcap, freshman Jacob Spinks (Monterey, La.) picked up the win in his first collegiate start. Rhett Blackburn (Oak Grove) pitched the final inning and struck out three.

The plan is for Co-Lin to play 21 dates this season. That’s only slightly less than the 23 dates they play in previous seasons.

It will be a schedule of only other Mississippi schools though as the Mississippi Association of Community College Conference (MACCC) decided to eliminate games against out-of-state schools for this season due to COVID-19.

Games against other MACCC schools won’t begin to count towards division standings until the Feb. 27 doubleheader against Coahoma. Co-Lin and Southwest will meet again for two games on March 2.

The pandemic has been the biggest foe faced by Co-Lin prior to seeing Southwest on the field.

“Our fall plans were to have eight weeks of practice,” said Smith. “Due to COVID-19, I think we only had three weeks of that with our whole team together. We had a few guys test positive, but we had way more get quarantined due to contact tracing.”

Smith says that his team is a close bunch as they’ve stuck together even tighter as the season approached.

“In a way you’re trying to create a little bubble for your team,” said Smith. “They go to class, go to eat, go to practice and go back to their dorms. They’ve done a good job of limiting their exposure to people outside the team this semester. That just shows you how bad they want to play.”

Sunday the Wolves make their home debut on Sullivan Field as they host Meridian C.C. for a doubleheader beginning at 2 p.m.