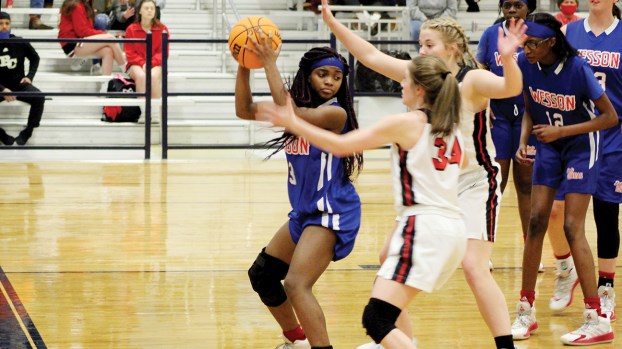 Photo by Cliff Furr Alyssa Leggett and Emma Falvey (34) of Loyd Star converge on Wesson freshman point guard Meleyjah Lyons under the basket Monday during the Region 7-2A Tournament at Bogue Chitto.

Loyd Star junior point guard Aubrey Britt is known all over the state as one of the top distance runners in Mississippi as she’s now won the 2A cross-country title four years in a row.

Monday in the Region 7-2A semifinals against Wesson at Bogue Chitto, Britt was running through the Lady Cobra defense to shoot layups.

Britt scored 11 points in the third quarter to finish with a game high 24 points as Loyd Star took a 56-46 win over the Lady Cobras.

Wesson and coach Michelle Nunnery were intent on guarding Loyd Star deep in their backcourt as the Lady Cobras mixed up their press-defense looks with success in the first half.

A 3-pointer by Britt just before the end of the first quarter put LS up 14-11 after the opening eight minutes. Loyd Star led 23-16 at halftime.

The Wesson defense started the second half creating turnovers and a steal and layup by WAC freshman guard Meleyjah Lyons cut the Loyd Star lead to 25-22 just three minutes into the third quarter.

That’s when Britt stopped picking up her dribble to assess the Wesson defense and started driving straight at the basket. Three straight layups at the rim by Britt built the lead back out and then back-to-back jumpers by seniors Marleigh Bullock (hers was a 3-pointer) and Calia Beard had the Lady Hornets on an 11-0 scoring run.

The Lady Cobras didn’t quiet though as Nunnery’s group fought back at the start of the fourth quarter.

The Wesson roster is a mix of young, athletic players with some veterans mixed in. Nunnery starts a pair of freshmen and three juniors as Wesson has good length and size in the interior.

With five minutes remaining Wesson had cut the lead to 44-40.

Over the final minutes the Lady Hornets knocked down their free throws as Wesson scrambled to create turnovers.

Bullock made four straight free throws in the final period and sophomore forward Alyssa Leggett went 2-for-2 from the line as well. Leggett scored 14 points for coach Seth Britt — eight of those points came in the final quarter.

Loyd Star was able to hold the ball and run the final minute off the clock.

Lyons and Kionna Gibson scored 13 points each for Wesson.

Wesson will play Bogue Chitto in the consolation game Thursday at 6 p.m. Both of those teams will be on the road next week in the opening round of the MHSAA 2A state playoffs.

Loyd Star will host a home playoff game next week, but first they’ll meet West Lincoln in the championship game Friday at 6 p.m.

West Lincoln took a 67-53 win in overtime the first time the schools played. The second matchup had West Lincoln winning 52-36.

For Britt, he knows what his team needs to do against the Lady Bears. It just comes down to making those plays.

“We’ve got to play really good defense — West Lincoln can spread you out with their size and athleticism,” said Britt. “We’ve got to do a better job this time on the defensive glass than we did the first two times we played. And we’ve got to make the shots we’re supposed to make.”

Tuesday the Region 7-2A Tournament hosted by Bogue Chitto began with the No. 2 seeded Enterprise Yellow Jackets meeting No.... read more