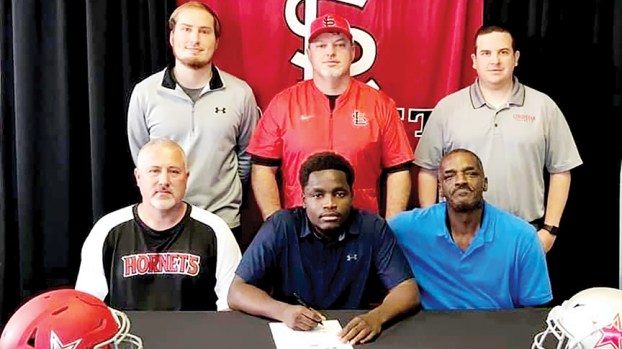 Loyd Star loves Eric Birch. The affable, always smiling senior running back was surrounded by his supporters Wednesday as he signed a letter-of-intent to continue his football career and education at Oklahoma Panhandle State University.

Panhandle State is an NAIA program that’s located in Goodwell, Oklahoma. It’s over 800 miles from Hilltop to where Goodwell sits just south of Colorado. How did the Aggies find out about Birch?

It was easier than you’d expect. Panhandle actually has a former Loyd Star assistant on their staff. Their linebackers coach Roderick Varner was an assistant at LS for former coach Adam Cook.

Varner reached out to Birch early in the season to let him know that the Aggie coaching staff would be keeping an eye on him.

“Coach Varner got ahold of me and said he’d mentioned me to his head coach,” said Birch. “He told me they’d be scouting me this year and we talked every few weeks throughout the season.”

What the Aggie coaching staff saw on film was the Birch of old as he was able to shake back from an injury filled junior season to lead the Hornets in rushing as a senior.

Birch was a lunch-pail player for the Hornets in 2020 as he carried the ball for 178 times for 1,150 yards and 15 scores in just nine games while also earning Daily Leader All-Area honors.

“They’re getting a dedicated football player,” said Loyd head coach Brian Ford. “Eric is a hard-nosed running back that’s not afraid of work.”

Birch also led the team with 15 rushing touchdowns as a sophomore when he ran for 814 yards on a Hornet team that went unbeaten in region play.

As a junior he suffered an ankle injury that kept him from dressing out for half the season. Even when he did play, he was never at full speed that year.

During that 2019 season you could see the pain on Birch’s face as he stood on the sideline wearing jeans and his jersey while his team took the field without him in pads.

That’s part of what endears him to so many — there’s nothing fake about him.

Wednesday those hard times were in the ancient past as Birch prepares to make the transition to college athlete.

“I’m going to make the absolute best out of this opportunity,” said Birch.