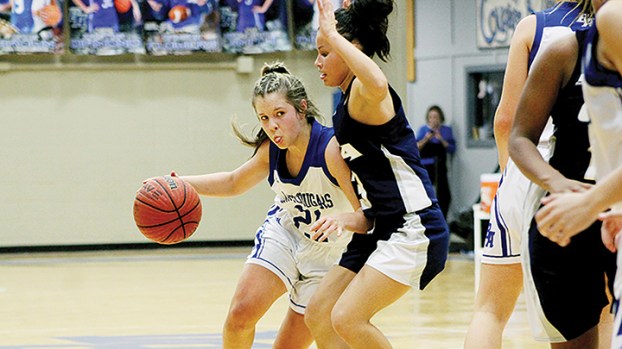 Daily Leader file photo Brookhaven Academy junior point guard Anne Brantley Warren hit a layup at the buzzer Wednesday to take her team to overtime against Simpson Academy. In OT Simpson outscored the Lady Cougars 10-5 to secure the victory in the opening round of the MAIS 4A South State Tournament.

Brookhaven Academy junior point guard Anne Brantley Warren drove the length of the court in just under eight seconds Wednesday night against Simpson Academy to hit a layup that tied the score at 28-28 just as the final horn sounded.

In the overtime though, Simpson Academy outscored BA 10-5 to advance to the MAIS 4A South State Tournament semifinals. Brookhaven Academy ends the season with a 27-8 record.

Playing on Simpson’s home court in front of a large crowd, the game was tight from the tip.

BA led 9-8 after the first quarter and scored the only two points of the second quarter as Simpson failed to put a point on the board.

It was the third matchup of the season between the two schools with them splitting their first two games.

That’s a big reason why the action was so tight for the first three quarters. Both teams were cautiously feeling each other out.

“It was just the case of two teams who really knew what the other was trying to do and taking that away,” said BA head coach Ron Kessler.

Trailing 26-25 with 1:42 remaining in regulation, Warren went to the free throw line and hit 1-of-2 shots to tie the game.

Brookhaven got the ball back after a missed SA shot and had a chance to go ahead but an offensive foul call gave possession back to Simpson.

Simpson Academy then let 30 seconds run off the clock before calling a timeout with 29.7 remaining in the fourth quarter.

With just under 10 seconds left, Simpson sophomore forward Ma’Nia Womack drove the baseline and put up a short jumper that put her team up 28-26.

Once the clock issues were settled — time had run off after Kessler called his TO — and multiple timeouts were called for strategy sessions, Brookhaven Academy set up to inbound the ball on the opposite baseline of their basket with 7.8 seconds remaining in the game.

Warren peeled off the back of a stacked setup and caught the ball on the run. As she dribbled down the Simpson Academy home sideline, Warren had a convoy of sorts as her teammates Lillie Gates and Abby Grace Richardson ran just ahead of her along with their defenders.

Richardson turned to screen Warren’s defender, which the point guard used to get just under the backboard for a layup that beat the clock.

Gates led BA with 16 points and 13 rebounds. The sophomore forward was recently tabbed as the top player in District 4-4A.

BA has a pair of seniors on their roster in Allison Covington and MaKayla Martin.

“This has been a great group to work with,” said Kessler. “We appreciate what those seniors have done in their careers and we’ll just keep working and try to come back even stronger next season.”