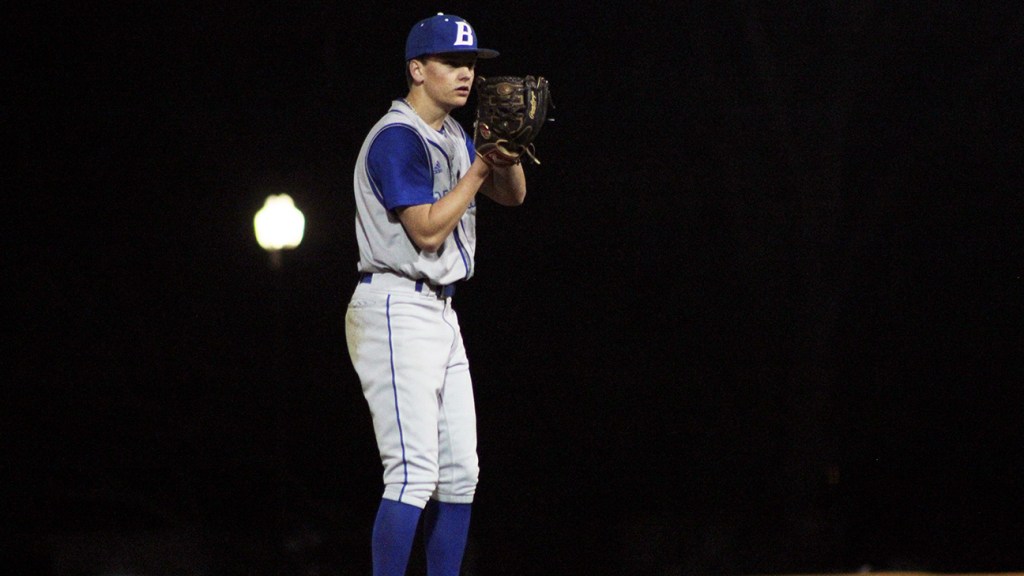 Photo by Hunter Cloud/Natchez Democrat Brookhaven Academy southpaw pitcher Judson Griffin looks to the plate Tuesday against Cathedral in Natchez. The Cougars and the Green Wave meet up again Friday for a varsity double header at BA.

Brookhaven Academy got MAIS District 4-4A play started Tuesday with a trip to Natchez to face Cathedral School.

The sophomore pitching duo of Easton Boyte and Judson Griffin combined to hold the Green Wave scoreless as the Cougars took an 8-4 win.

“Judson was able to keep his pitch count down, so he’ll be available later this week if we need him,” said BA head coach Caleb Upton. “Both of those guys really battled to give us a chance.”

The two teams meet again Friday for a varsity doubleheader at Williams-Gillis Ballpark that begins at 5 p.m.

Boyte drew the start and went four innings on the mound. He struck out four, walked three and threw 77 pitches without giving up an earned run.

Griffin tossed he final three innings and only needed 48 pitches to get it done. He also didn’t give up an earned run as he struck out five and walked one.

Thus far in 2021 the Cougars (4-4) have played a challenging schedule as Upton and his coaching staff have used the pre-conference slate of games to tweak their lineup.

The top of the order was working for BA Tuesday as senior leadoff batter Collin Waldrop finished with a double, a single and drove in one run. Batting behind him in the two-hole, Co-Lin baseball signee Gavin Brogden also had a pair of hits and scored a pair of runs while driving in two.
Both of Brogden’s hits went for doubles. It was his double in the sixth inning that gave BA their first lead of the night.
Trevor Fortenberry reached to start the inning on a walk. Fortenberry then stole second and reached third on a groundout by Waldrop.

Brogden’s double scored Fortneberry and put BA ahead for good.
Cathedral went up 3-0 in the bottom of the first inning before the Cougar defense settled in. In that first inning the BA defense has an error and issued two walks.

Leading 5-4, the Cougars broke things open in the top half of the seven as they plated three more runs to pad their lead.

Junior Michael Watts started the frame with a single, stole second and then moved to third after a walk from Boyte.

A sacrifice bunt by Griffin scored Watts. The next BA batter, Trevor Fortenberry, also laid down a bunt and reached on an error that scored Boyte.

The final BA run of the night came on a Waldrop single later in the inning.

BA has a two-game win streak after beating Simpson Academy 9-2 a week ago. Friday they’ll throw their ace, junior pitcher Caston Thompson. Junior Tyler Fortenberry will also start on the mound Friday for the Cougars.

Thompson pitched the win over Simpson as he scattered five hits and struck out four.

The win against Cathedral was the first district victory in Upton’s brief career as the Cougars never got to division play before the season was canceled in 2020.

It came against his alma-mater and his old high school coach.

Upton was a standout for coach Craig Beesley and the Green Wave before going on to play at Hinds C.C. and Mississippi College.

“When we were walking up, my temptation was to head to that home dugout on the first base line,” said Upton. “It was a little strange, but coach Beesley and his staff are such high-class guys and they’ve all taught me so much about the game.”

The Cougars are on the road for all three games next week. They play at Simpson Academy Monday and then in a tournament Thursday and Friday in Vidalia, Louisiana.