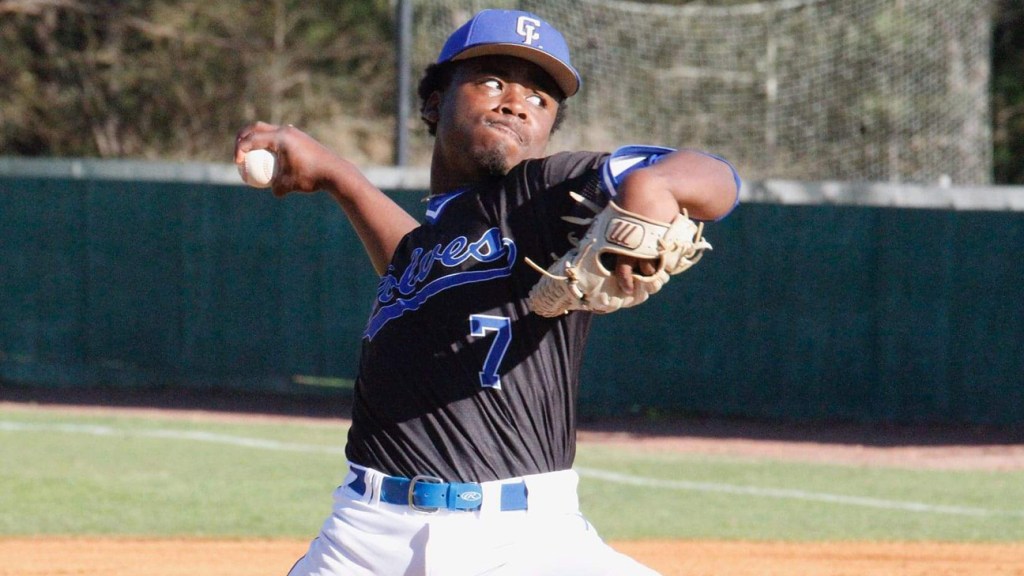 Photo by Co-Lin Sports Info Co-Lin sophomore pitcher Sevante Quinn (Brookhaven High) and the Wolves are back at home Saturday when they host Itawamba for a doubleheader that begins at 2 p.m.

The Copiah-Lincoln Wolves baseball team kept themselves near the top of the table with a sweep of Holmes on the road Saturday in Goodman. Co-Lin is 12-8 overall on the season and 8-2 in division play.

The Wolves will be back at Sullivan Stadium this weekend when they host Itawamba for a MACCC doubleheader beginning at 2 p.m. Saturday.

One thing that Co-Lin head coach Clay Smith’s team has proven in 2021 is that they can win a high scoring shootout.

That’s what CLCC did in game one against Holmes as they won 17-15 in the nine-inning opener.

Holmes actually outhit Co-Lin 17-13, but the Bulldogs committed three errors compared to none for Co-Lin.

Trailing 7-4, Co-Lin erupted for nine runs in the seventh inning. Part of that big inning for CLCC was a grand slam by LSU transfer Tom Biggs (West Monroe High).

Biggs is batting .414 with a team high 24 RBIs this season. He drove in seven runs in game one against Holmes. Wesson product Kenner Bizot also doubled, singled and drove in a run in the opener.

In game two, Co-Lin used a run in the fifth inning to pull ahead and then hold on to a 4-3 win.

It was sophomore Hunter Estes (Lamar Christian School) who drove in the game-winning run for CLCC in game two.

Starter Jacob Spinks (Monterey, La.) was masterful in the win for Co-Lin. The freshman allowed only one earned run on four hits. He struck out 11 and walked just two.

The first NJCAA national poll of the season was recently released and Co-Lin came in at No. 20. In all six MACCC teams were ranked with No. 3 Pearl River leading the way. Also garnering a national ranking were No. 10 Meridian, No. 14 Jones College, No. 16 Itawamba and No. 19 East Central.