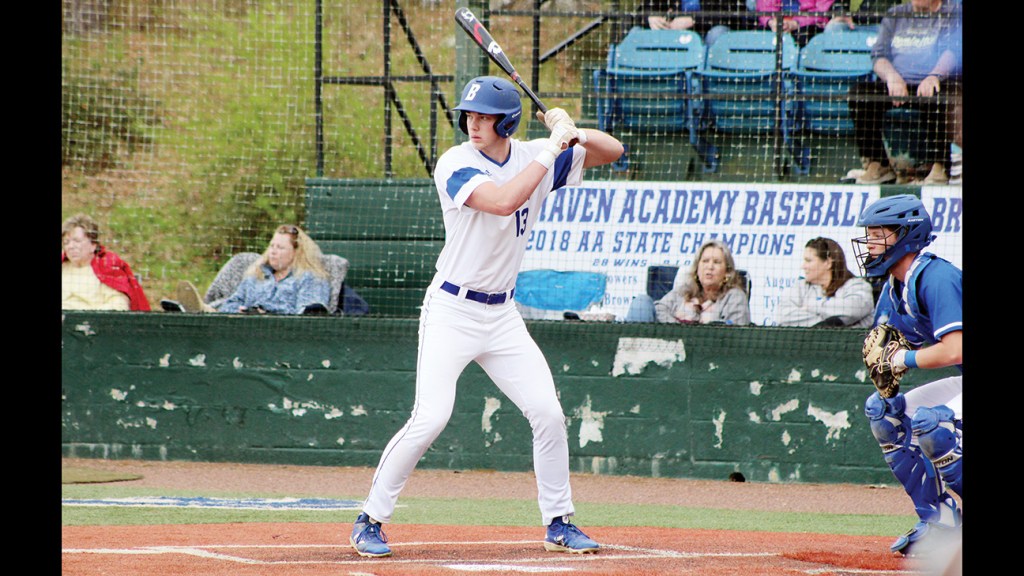 Photo by Cliff Furr Brookhaven Academy senior Dylan Fortenberry awaits the pitch from Adams County Christian Monday. Fortenberry finished with two hits including a double and drove in two runs for the Cougars in their 11-1 win over the visiting Rebels.

Brookhaven Academy scored two runs in the first, three in the second and six in the third as they run-ruled Adams County Christian School 11-1 Monday at Williams-Gillis Ballpark.

The win moves BA to 4-0 in MAIS District 4-4A and 8-6 overall. The Cougars and coach Caleb Upton will play two games at ACCS Friday beginning at 5 p.m. — weather permitting.

Leadoff batter Gavin Brogden got BA started with a single to begin the game. A Co-Lin baseball signee, Brogden then stole second and scored on a Collin Waldrop double.

The next batter, junior Caston Thompson, singled to score Waldrop.

“It’s a pretty good sign when your first three batters start the game with a hit,” said Upton. “The top of my lineup has been really good this year.”

With two outs in the second, Brogden scored on a wild pitch. Thompson singled again to score Waldrop again later in the inning to put BA up 4-0. The final BA score of the frame came when a Dylan Fortenberry double scored Thompson.

The Cougars blew things open in the third starting with run via a wild pitch that scored Judson Griffin.

Again, it was the trio of Waldrop, Thompson and Dylan Fortenberry that did the most damage for Upton and his coaching staff.

ACCS scored their lone run of the night in their final at-bat when a Tripp Cotton double drove in Blake LaPrarie.

Sophomore pitcher Easton Boyte was dominate on the mound for BA. Boyte went four innings and struck out seven on 68 pitches. He gave up one hit and zero runs.

Brogden pitched the final inning and struck out two.

Last week, the Cougars played in a tournament held in Vidalia, Louisiana. They beat district rivals Cathedral School for the fourth time this season. The 5-4 victory was secured by a Waldrop walk-off hit.

In their Friday game against Presbyterian Christian in Vidalia the Cougars led PCS 4-3 after 5.5 innings. In the bottom of the sixth the Bobcats scored four runs to take a 7-4 win.

After BA finishes their series with ACCS, they’ll have two more division opponents to play this season. They’re scheduled to have a week off before meeting Oak Forest Academy on April 6 at home.

The next two games in that series will take place on Friday, April 9, at Oak Forest in Amite City, Louisiana.

The following week BA will host Silliman Institute on Tuesday and then wrap up the regular season Friday with a doubleheader at SA in Clinton, Louisiana.

The winner of District 4-4A will meet up in the first round of the playoffs with the fourth placed team from District 3-3A. Members of District 3-3A include Hartfield Academy, Central Hinds Academy, St. Aloysius, Hillcrest Christian, Simpson Academy and Park Place Christian Academy.