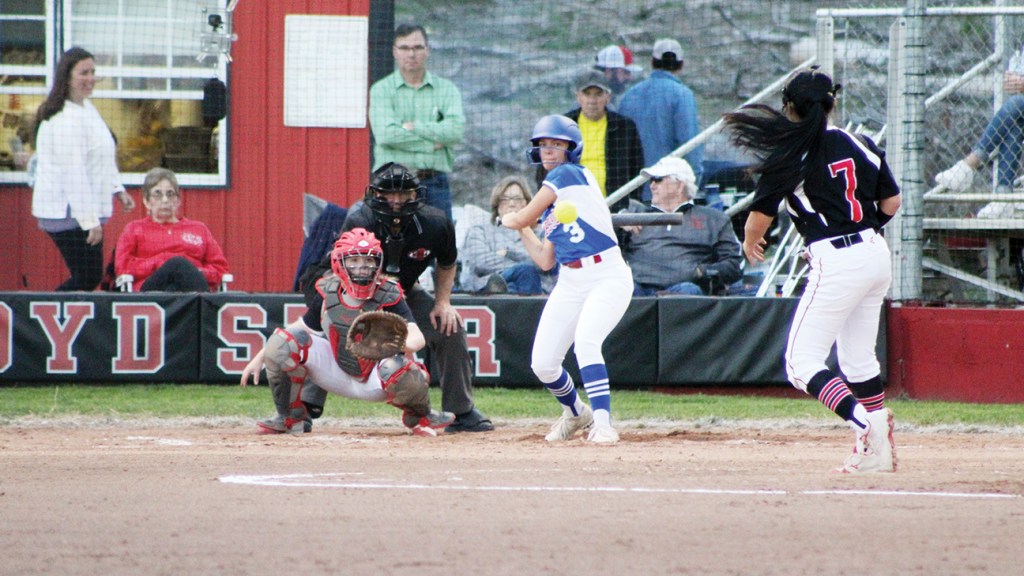 The outfielders for both teams were set deep for much of the night Monday as homestanding Loyd Star and visiting Wesson both showed power at the plate in their Region 7-2A softball showdown.

Loyd Star out-hit Wesson 10-7 in the game as both teams had balls smack off the signs that ring the outfield fence.

Leadoff batter Carson Hughey singled for Loyd Star to start the game. Junior Aubrey Britt then bunted her way on base for Loyd Star.

Lady Hornet sophomore catcher Alyssa Leggett — the daughter of head coach Scott Leggett and his assistant/wife Denise — cleared the bases and put her team up with a 3-run no-doubter, homer to left field.

Leggett singled to start the fourth and then reached second on a bad throw from Wesson. She scored when sophomore Marley Britt stroked a double off the left field fence that looked at first like another bomb.

Britt scored later in the inning via a Brooke Cade groundout that put Loyd Star up 5-0.

Wesson and coach Michelle Nunnery kept battling though as they got a pair of runs in the top of the fifth.

Freshman Julianna Wilson singled to get the first Lady Cobra baserunner aboard. She was then replaced by courtesy runner Macy Loy.

Loy moved up to second via a bunt single from junior Lexie Guess. Loy scored on a Kyla Smith single and Guess crossed the plate later in the inning on a Laynee Crapps single.

Crapps started in the circle for Wesson and gave up five runs on 10 hits while striking out two. Crapps was a Daily Leader All-Area selection as a sophomore and is one of just two senior starters for the Lady Cobras.

Sophomore pitcher Carson Hughey picked up the win for Loyd Star on the bump.

The final Wesson score came in the sixth when Alayna Westrope scored via a Loyd Star error.

In the last Wesson at-bat, Hughey got two pop outs and a ground out to win the game.

“It’s a big district win for us,” said Scott Leggett. “We played great defense again. We rolled two huge double plays and got some big hits.”

The Lady Hornets have now beaten all four of their region opponents in the first run through division play. Last week Loyd Star beat Bogue Chitto 2-0 on the road after previously besting West Lincoln and Enterprise.

Loyd Star is scheduled to play at Enterprise Thursday and then against Purvis and Ocean Springs Saturday in a tournament hosted by South Jones.

Guess had a game-high three hits as the Wesson leadoff batter. Crapps had two hits as well.

Wesson is still yet to face Bogue Chitto or West Lincoln this season. They’re 0-2 in the region after losing 6-5 to Enterprise in eight innings last week.

“The talent is there, but we’ve got to get it figured out,” said Nunnery. “We’ve got to hate losing and start to turn it on a little sooner.”

Weather permitting — Wesson is scheduled to play at West Lincoln on Thursday and host Clinton at home Friday.