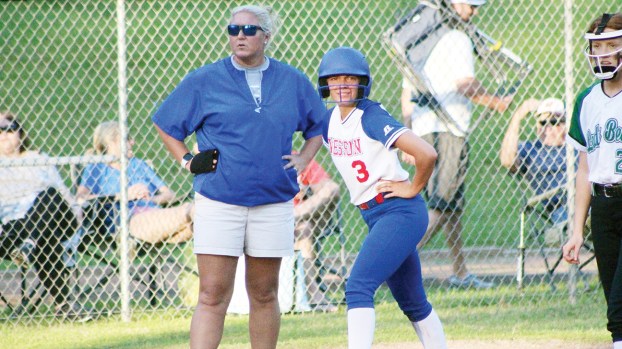 Photo by Cliff Furr Wesson softball coach Michelle Nunnery and senior Bre Westbrook stand at third base Monday against West Lincoln. The two schools will meet again on Monday at West Lincoln in another Region 7-2A contest. 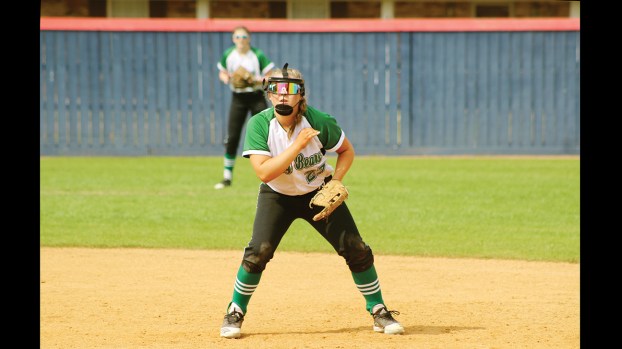 Here’s a look at how local teams faired in Monday MHSAA softball action.

West Lincoln and coach Anita Thornton stayed in the hunt for second place in Region 7-2A with a 2-0 win at Wesson Monday.

The Lady Bears (7-4, 3-2) got a complete game, two-hit pitching performance from freshman Madelyn Spring. Spring struck out four, walked none and only needed 68 pitches to get through the seven-inning game.

Wesson senior pitcher Laynee Crapps held West Lincoln to just five hits on the day as she struck out 10 and only walked one. One of the West Lincoln runs was earned as both teams committed three errors apiece in the field.

In the top of the fourth with one out, WL junior catcher Camryn Summerall smacked a double for the Lady Bears. With two away, senior Jona Hughes hit an RBI single that scored Summerall and put West Lincoln up 1-0.

The Lady Bears added an insurance run in the sixth when Mailey Kate Young got aboard via a one out triple. A hard-hit ball back up the middle by Summerall scored Young.

Wesson senior Bre Westbrook made it to third for the Lady Cobras in the bottom of the fifth. She got aboard on a dropped third strike, moved to second on a sacrifice and gained third via a wild pitch.

Spring was able to get Lexie Guess to pop-out to Young on first base to end the inning and scoring threat.

That would be the lone Wesson runner to reach third though as Spring got a fly out, a strike out and a ground out to go 3-up and 3-down in the final inning.

“Madelyn had a couple different pitches working for her today,” said Thornton. “The confidence she has when she steps into that circle is impressive — she’s such a poised player as only a freshman.”

Crapps and Kayla McElveen hit safely for Wesson and coach Michelle Nunnery in the loss. Summerall led WL with a pair of hits. Ramsey Hall also hit safely for the Lady Bears.

It only took four inning Monday for coach Mandy Vinson and her Brookhaven High team to demolish Laurel for the second time in a week. BHS used 11 hits to take an 18-4 win in Jones County.

Hunt blasted a home run while Sullivan added a double as did Benson. Sophomore Maggie Reynaud hit a triple and junior Layla Woodall hit a pair of doubles for BHS.

Woodall and senior Lauren Coghlan had two RBIs each for the Lady Panthers. Reynaud pitched the win and struck out three while giving up four hits.

Last week BHS beat Laurel 19-7 at home. Reynaud had a home run in that win and had a four RBI day at the plate.

The Region 5-5A standings are set as West Jones has won the division while South Jones took second place. BHS and South Jones split their regular season meetings. BHS will play in the post season as the third-place team.

Ole Brook will travel in their playoff opener on April 23. Who they’ll play is yet to be decided as it will be the second-place team from Region 8-5A — either Wayne County or East Central.