All hail 2021 king and queen of Ceres 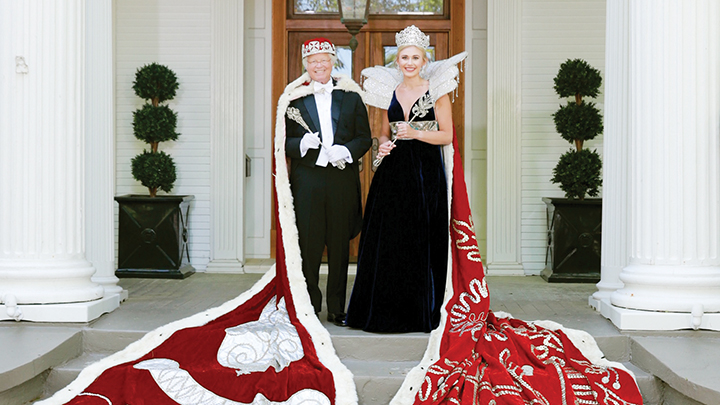 Photo submitted The Krewe of Ceres named Bill Sones as king of the 2021 Charity Ball and Mackenzie Claire Jackson was crowned queen at the event that took place at Lincoln Civic Center.

With the generous support of the community, Miller said, the Krewe will be on track to make its usual donations to area charities.

Bank of Brookhaven founder and Chairman of the Board Bill Sones was named this year’s king of the ball.  Mississippi State University pre-law student and Brookhaven High graduate Mackenzie Claire Jackson was crowned queen of the ball.

William David Sones was born and raised in Eupora. His parents were U.G. and Edna Sones.

He is a 1966 graduate of Eupora High School, where he was very involved in sports, playing football, basketball and tennis and running track. He played football under the leadership of coach Doug Sullivan, a former Charity Ball king. Sones developed a life-long love for tennis in high school.

Sones attended Mississippi College where he obtained a degree in business administration, then went to work with General Motors Acceptance Corporation.  One year later he began his 49-year career in banking.

In 1972, Sones became a loan officer at Bank of Prentiss (now Regions) and helped found Citizens Bank and Trust Company (now Priority One Bank) in 1974. The Sones family moved to Brookhaven in 1977 when Sones became manager of South Central Bank. He was named president of State Bank and Trust in 1980 and later served as chairman and CEO.

In 1999, Sones founded Bank of Brookhaven where he served as chairman, president and CEO. No longer a full-time banker, he continues as chairman of the board and as chairman of Haven Capitol Corporation.

He is a life deacon sixth-grade Sunday school teacher at First Baptist Church, where he also serves as church treasurer. Sones has won multiple professional honors and served on many boards locally, statewide and nationally.

She was a 2017 special honors graduate of Brookhaven High School, where she was inducted into the Academic Hall of Fame and National Honor Society, and was a Mississippi Scholar. She was a member of the BHS varsity tennis team from eighth grade to her senior year, and was a member of the Academic Team, Speech and Debate Team and Fellowship of Christian Athletes, where she served her senior year as media director.

She won the Frances Seavey English Award for the highest cumulative average in English for four years, the National Honor Society’s Most Organizations Served Award, an Academic Excellence Scholarship and an International Study Abroad scholarship from Mississippi State University.

In high school, Jackson was a member of the Junior Auxiliary Crown Club and Les Belles De L’Hospitalite, and was the Chamber of Commerce’s 2016 Miss Merry Christmas.

Now a senior at MSU, Jackson is pursuing a degree in English with a minor in Spanish and a concentration in pre-law. Enrolled in Shackouls Honor College, she is a Presidential Scholar and has consistently been on the President’s and Dean’s lists. In 2020, she was inducted into two of MSU’s most prestigious honor societies — the Mortar Board Honor Society and Phi Beta Kappa.

She is a member of Kappa Delta Sorority, where he has been a leader in several capacities, including Worship Night Chair and Parliamentarian. With KD, Jackson fundraises for Prevent Child Abuse America and the Sally Kate Winters’ Home. She has also worked for the MSU Dean of Students office.

In 2019, she studied abroad in Spain at Alcalingua in Alcala’ de Henares. She plans to pursue a juris doctorate degree at Mississippi College School of Law.

During the COVID-19 pandemic virtual study time, Jackson began a baking business named Heucks Sweet Treats. She is an active member of Heucks Retreat Baptist Church where she is involved in Vacation Bible School, Women’s Ministry and Disciple Now. She loves to be involved with HRBC’s mission at Grace Missions in Guatemala and donated a portion of her business’ proceeds to the mission in 2020.

Jackson has been a Krewe aide and maid.