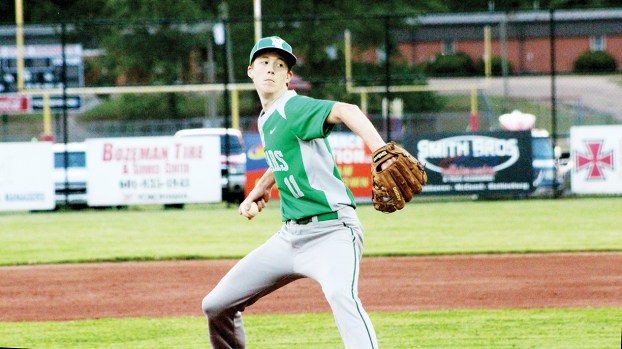 Photo by Cliff Furr West Lincoln senior pitcher Noah Addison struck out five Monday night for the Bears in their Region 7-2A matchup with Loyd Star. West Lincoln finishes its season Monday with a trip to face Bay Springs. 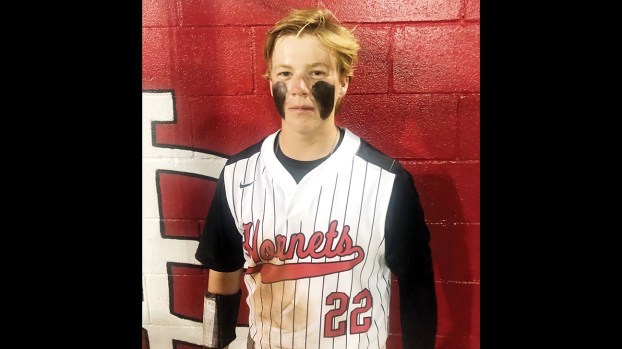 Photo by Cliff Furr / Loyd Star junior Dawson Hester gave up no hits and issued no walks as he pitched a four-inning perfect game Monday in a 12-0 win over West Lincoln. In the second game of the doubleheader Loyd Star won by a 10-0 margin.

This week is one for area MHSAA baseball teams to put a bow on their regular season. Games that had previously been rained out need to be made up as the playoffs begin next week.

For Loyd Star and West Lincoln that meant playing a Region 7-2A three game series had been bumped back due to wet weather earlier in the season. Things got started Monday at Loyd Star with a doubleheader between the schools and finished with a single game Tuesday at Flea Hop.

Monday the Hornets and coach Jared Britt got two dominant pitching performances in a sweep of the Bears. Junior Dawson Hester pitched a four-inning perfect game in the opener as the Hornets won 12-0. In the nightcap senior Wyatt Hodges took the hill for the Hornets and struck out 14 in a 10-0 victory.

The wins moved Loyd Star to 15-7 overall and 13-1 in Region 7-2A while West Lincoln fell to 3-16 and 3-11 in division play. All Region 7-2A teams picked up three forfeit wins this season as Amite County chose not to play baseball.

By appearances, Loyd Star is a team that looks like they love to play together. Hodges is one of only three seniors on the team along with Colby Carwyle, and Harrison Hux.

It’s a nest of Hornets that have come up playing little league and travel ball together and their closeness isn’t just for show or forced in any way.

“We’ve all grown up together for the most part,” said Hodges, a Co-Lin baseball signee. “It really is a band of brothers — through the good and bad.”

Hodges and Hester are actually little brothers of two members of the 2017 Loyd Star 2A state championship winning team.

Hodges’ older brother Cade was a junior pitcher on that title team and now plays at Louisiana Tech. Hester’s brother Rials was a sophomore in 2017 who later developed into a starting pitcher/catcher for the Hornets.

Rials Hester threw a mean curve for the Hornets during his time on the mound, something little brother can do. Monday Dawson also had his changeup and fastball working as he needed just 45 pitches to get through 12 batters.

“I’ve thrown some no-hitters when I was younger, but tonight was the first time I’ve ever thrown a perfect game,” said Hester.

Hester struck out nine in the win while Jon Brantlee Pedigo took the loss on the hill for coach David Gilbert and West Lincoln.

Hux hit a double in game one and drove in two runs for LS. Hester and Casen DeHart also had two RBIs each. Hodges, Colby Terrell and Blake Thornton all had one RBI each in the win.

Loyd Star will wrap up the regular season with a Thursday trip to West Marion and a road game Monday at Franklin County.

The MHSAA playoffs begin Thursday, April 29. The higher seed in each series will host game one on Thursday, with game two being played at the lower seeds home field on Friday, April 30. If needed, game three will take place on Saturday, May 1 and will be hosted by the higher seed.

That’s all depending on the weather though — which could call for flip flops, parkas or rain jackets between now and the beginning of postseason play.

“We’ll either play Newton or Philadelphia in the first round,” said Britt. “They’re still making games up this week to decide their seeding.”

Hodges, Hester along with junior pitchers Riley Easterling and Craig Bass have been a huge part of the success that Loyd Star has had this season.

“Our pitching has been big for us this year,” said Britt. “We’ve started to come on and play good defense behind them and we’ve been pretty solid at getting the timely hits this season.”

Pinch hitting in the bottom of the sixth, Carwyle got an RBI single that put the Hornets up by 10 runs and ended the game.

Hester had three hits and two RBIs for Loyd Star in the finale. Hux, Hodges, Easterling, Thornton and Connor Cunningham all also drove in one run each.

Hodges walked just one and gave up one hit — to Cooper Moak — while throwing 73 pitches over six innings of work.

Moak, Addison, Logan Suchy, Justin Pratt, Spencer Maxwell and Ryan Hall are seniors for the Bears. They’ll wrap their season up Monday with a trip to Bay Springs.

“I was locating my fastball tonight and that gave me the confidence to go at them,” said Hodges as he iced his arm after the game.

Hester and his teammates are hoping to still be playing in the weeks to come.

“We’re having fun and we want to make a run as deep as we can,” said Hester. “We’re not ready to be done playing yet.”