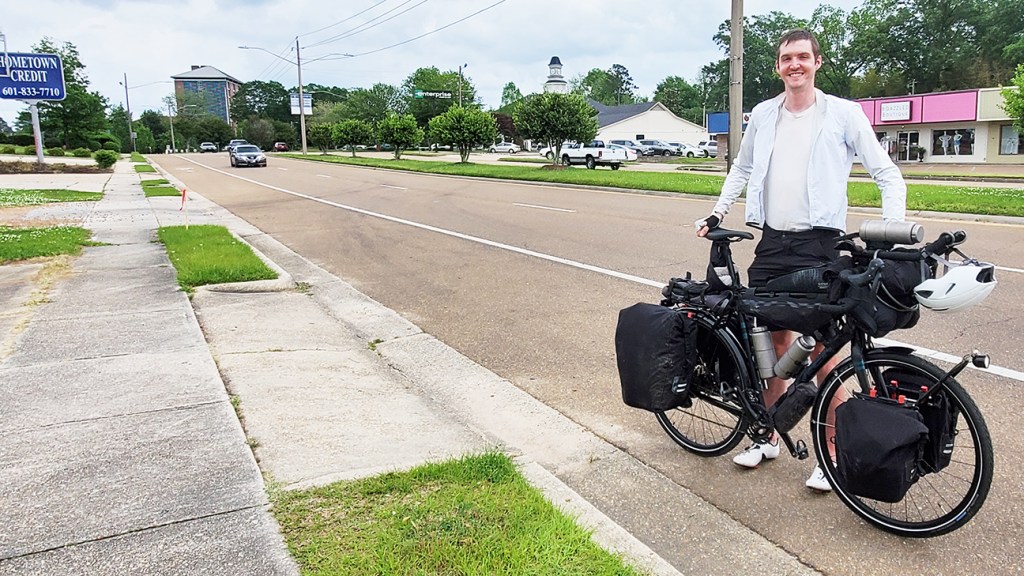 Photo by Brett Campbell Cyclist Keenan Grundy had traveled more than 3,000 miles before entering Brookhaven Thursday. He had ridden 35 days since leaving his home in Columbus, Ohio, and was heading next to Tennesee via the Natchez Trace, then westward to San Francisco before eventually turning toward home.

Ohio cyclist Keenan Grundy passed the 3,000-mile mark on his bicycle about 20 miles before rolling into Brookhaven Thursday.

The former IT tech said he left home in Columbus, Ohio, near the end of March on a journey to … well, do something different.

He first rode to visit a sister in Philadelphia, Pennsylvania, then eastward to Washington, D.C., then south through the Carolinas and Georgia into Florida to visit a sister in Pensacola. He covered thousands of miles in a rather short period of time, and after taking a few days to rest and go slower through southern Alabama, he decided he was missing too much by moving so quickly.

“I decided to slow down and just enjoy it,” he said.

So when he rode into the Homeseekers’ Paradise Thursday morning, the 29-year-old rode around town enjoying the scenery, even visiting the Military Memorial Museum. He pitched his tent Thursday night in the West Lincoln yard of a family who offered him a safe place to stay away from the highways before setting off again Friday morning.

He has survived numerous storms along the way — including one in Lincoln County overnight — with the worst ones coming on the first night of his journey and another that brought 70 mph wind gusts as he attempted to ride. Grundy said he feared for his life for awhile as he rode through South Carolina but felt very welcomed by people once he made it further into the South.

He’s headed eventually to Oklahoma, Arizona and the San Franciso Bay area of California, where he was born and raised. He’ll stop to visit family and friends and spend some time in each of the national parks along the way.

“From there, I guess I’ll make my way home,” he said, shrugging and smiling.

But first he’s off to the Natchez Trace, where he plans to ride it from start to finish, then turn westward from Nashville.

With just about everything he needs packed into multiple bags attached to his bicycle — “It can take months, even a year, to figure out the most efficient way to pack everything,” he said — and three refilled water bottles on the bike’s frame, Grundy pedaled off in the direction of the Mighty Muddy Mississippi with a smile on his face and many more thousand miles to go.