Rancifer reigns one final time as 5A shot put queen 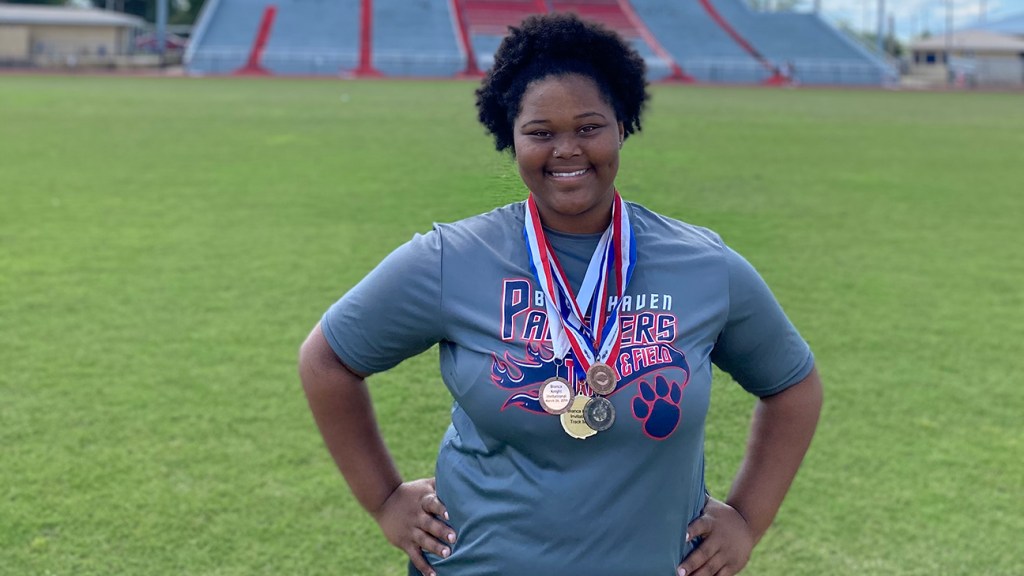 When Ah’Menya Rancifer was in seventh grade, her mother Annie had her pickup a shot put in the family’s front yard.

Annie was a state champion shot put thrower for BHS in 1994 and wanted to see what her daughter could do as a young junior high student.

Ah’Menya didn’t fully know what she was doing technique wise but muscled the shot off the front porch and far into the yard.

“Oh yeah,” said her Momma. “You’re going to be on the track and field team at school.”

That’s how it started and as far as her high school career is concerned, Rancifer ended things with another state title at last week’s MHSAA 5A State Track Meet.

As an eighth-grader she took third place at the state meet in 2017 and ever since she’s been golden, winning first place as a freshman, sophomore and now again as a senior.

The MHSAAA didn’t host a state meet her junior year due to COVID-19, but if they had she’d have been the prohibitive favorite to win that too.

Her mother has been her biggest cheerleader as her family support system has always been strong. The Rancifer family name is one that has been familiar to BHS fans for many years.

Her first cousin Charles “Bobo” Rancifer was a football standout for the Panthers before going on to play collegiately at Co-Lin and the University of Toledo.

Ah’Menya is quick to credit those who have helped her keep her focus on the sport and improve on her technique over the years. She credits former Ole Brook football star Jimmy Johns, local track athlete and trainer Dedrick Clark and first year BHS track assistant coach Sandra Banks as some of the people who’ve been there to mentor during her career along with offering critiques of what she could do better.

As a freshman she won her first title with a throw of just over 37-feet, more than two feet longer than the second-place finisher from Lafayette County.In 2019 the results were nearly identical as Rancifer was again over two feet better than Mariah Holland of Lafayette.

This season hasn’t been the easiest as COVID-19 protocols, quarantines and weather cancelations were all issues that high school track athletes have dealt with throughout the spring.“There was just so much uncertainty coming into this year,” said Rancifer. “It didn’t get real until we had our first meet and could actually compete. I felt like I was behind in my usual training schedule, but I knew I didn’t want to end my career with anything less than first place.”

Last week at Pearl High in a 5A meet that was delayed once by wet weather, Rancifer went out on top with a throw of 36-00.75. Second place finisher Cierra Crusoe, a sophomore from Columbus, came in at 35-09.75.

The win may have been the sweetest of a career filled with victories and time spent on top of the podium. “It was emotional,” said Rancifer. “I was crying, my momma was crying, and coach Banks was crying. They were happy tears though.”

Rancifer won’t be putting the 4 kg (8.8-pounds) shot put down any time soon. She’ll continue to throw on the junior college level for Hinds Community College.

In the state’s junior college athletics league, the MACCC, there are only three schools that field track and field programs — Hinds, Coahoma and Meridian C.C.

Hinds is a national power that routinely produces Olympic level athletes. When she gets to Raymond, Rancifer will also throw the discus for HCC. Though she prefers the shot, she’s been 5A runner up in discus as a freshman, sophomore and senior.

Her plans are to major in criminal justice, but she’s also interested in other career paths as well. “I want to get my commercial driver’s license (CDL) one day too,” she says with a laugh. Rancifer has an uncle and multiple cousins who drive trucks, and she could see herself doing that too one day.

With her future to be decided, Rancifer’s place in Ole Brook track history is set.

“Ah’Menya is probably the most decorated athlete to ever come through this program,” said BHS track coach Darien Dorsey.