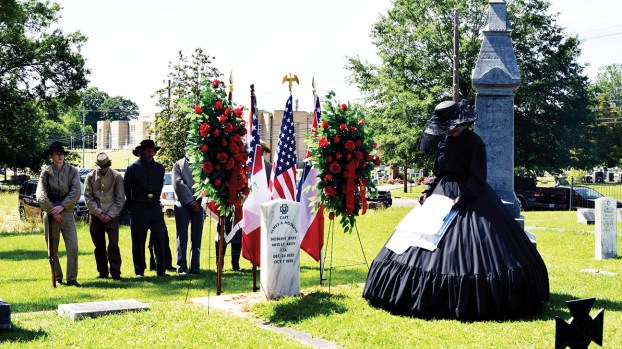 Photo by Emmaline Wolfe Members of the Sons of Confederate Veterans commemorated a new military headstone for Capt. James Alexander Hoskins Saturday. Hoskins was commander of the Brookhaven Light Artillery during the American Civil War. 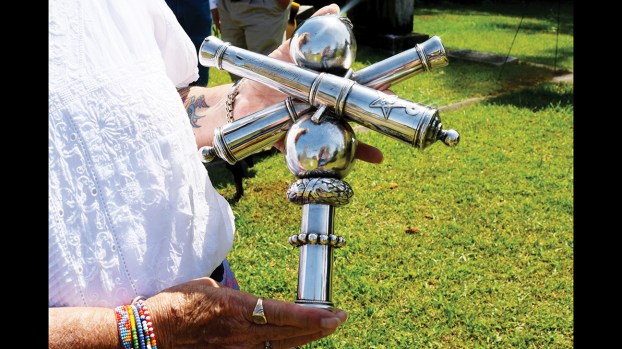 Photo by Emmaline Wolfe Members of the Sons of Confederate Veterans commemorated a new military headstone for Capt. James Alexander Hoskins Saturday. Hoskins was commander of the Brookhaven Light Artillery during the American Civil War. A silver flag tip was made from collected silver and used on the flag of the Brookhaven Light Artillery during the war. The tip will be donated to the Grand Gulf Military Park museum.

A Brookhaven Civil War artillery captain has been honored with a new grave headstone.

On Saturday, May 15, the Sons of Confederate Veterans held a memorial service at the Mary Jane Lampton Auditorium to commemorate the new military headstone of the late Capt. James Alexander Hoskins.

Hoskins was the commander of the Brookhaven Artillery that fired on Farragut’s Fleet as it passed the Grand Gulf. After the war, he established circular sawmills that helped bring jobs to the recovering city. He also helped build several miles of railroad tracks around the area.

Roy L. Wooten and Michael Harris began researching J. A. Hoskins in the late ’90s. They felt that his efforts needed to be honored with a headstone from the federal government. To convince them that he was worthy of receiving one, the group had to prove his burial place, service record, get permission from his descendants, and assure that he did not already have a headstone in place. This process took Harris about seven years to complete.

Capt. Hoskins died Oct. 7, 1898, at age 66, due to a yellow fever outbreak and was buried in Jackson. On March 4, 1900, Hoskins’ remains were moved to his family cemetery in Brookhaven. This move caused some issues in trying to get his burial record proved to the government.

The memorial service began with a presentation of colors, honoring the United States, Mississippi, Confederate and Christian flags. Next, the Brookhaven Light Artillery gave a proclamation of Hoskins’ life, family and service to Brookhaven.

A police escort brought the Hoskins family and guests to the Hoskins-Whitworth Family Cemetery.  Another presentation of colors preceded the unveiling of the new headstone and a traditional playing of Taps. A reception followed at the Exchange Club Pavilion.

During the service, the Hoskins family announced they would be donating one of James’ heirlooms to the Grand Gulf Military Park museum. This heirloom is a silver flag tip that the city of Brookhaven had made from collecting silver. The Brookhaven Light Artillery will make a replica of the flag tip to carry on its flag in remembrance of Hoskins and the men that followed him into battle.