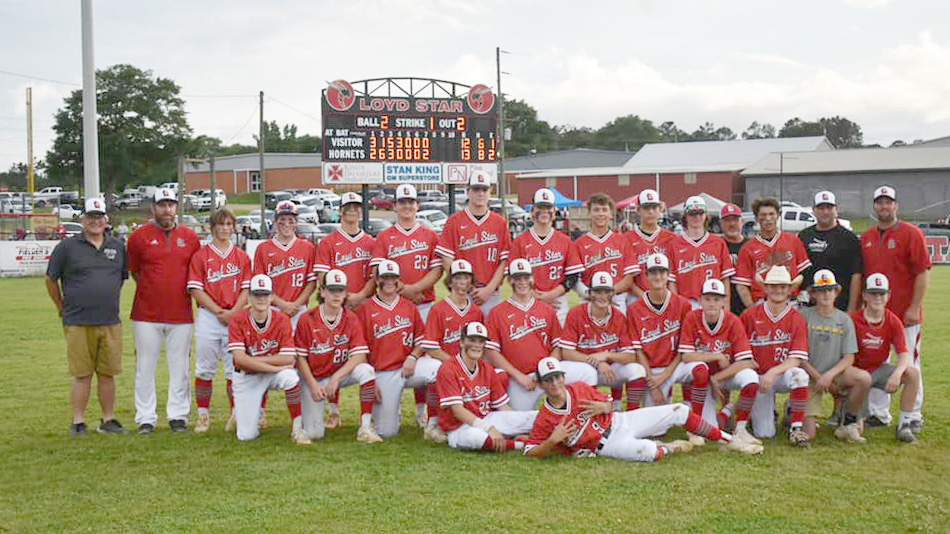 Photo submitted / Loyd Star is on to the MHSAA 2A South State Championship Series to face Taylorsville. The Hornets will host game one Friday at 7 p.m. on Smith Field.

Those were the words of Loyd Star head coach Jared Britt last Thursday, after his team dropped their MHSAA 2A quarterfinal opener 12-5 to Puckett on Smith Field.

Britt may have known his words would be prophetic, but he couldn’t have known just how spot on they would be. His team did win game two to even up the series Saturday at Puckett by a 17-7 margin.

The rubber match of the series started Monday and finished Tuesday with the Hornets battling to their final out and just like their coach predicted — they didn’t quiet.

Sophomore Blake Thornton hit a two-out bloop single just over second base to give Loyd Star a walk-off 13-12 win in the bottom of the seventh inning Tuesday.

Monday night as the game was played in a steady downpour, each team traded big half innings as runs came in bunches.

When the game was postponed until Tuesday, Loyd Star led 11-9 with Puckett due up in the top of the fourth.

The weather Tuesday ended up being better than predicted and Puckett wasted little time in gaining back the lead.

Both teams used their starting pitcher from that Thursday night opener. For Loyd Star it was junior southpaw Dawson Hester while Puckett countered with sophomore ace Matthew Boszor.

Hester started the fourth strong by striking out the first two batters he faced, but then gave up a single to senior Paxton Luckey.

The next batter was senior Price Tullos and just like every at-bat since Tullos hit two home runs in the series opener, Loyd Star put him on first via an intentional walk.

Senior Waylon Sebren would make Loyd Star pay by turning on the second pitch he saw and hitting a rocket over the left field fence.

It was Sebren’s third home run of the series and second of the game.

That 12-11 lead for Puckett appeared to be safe as Boszor was cruising on the mound. In the series opener he gave up just three hits on 109 pitches while walking five and striking out five. He gave up two earned runs in that game as well.

Tuesday, he put Loyd Star up and down in the fourth and then got a strikeout to end the fifth when Loyd Star had runners on first and second. The sixth was more of the same as he struck out Thornton and forced groundouts by both Carter Holcomb and Caleb Smith to quickly get through another half inning.

Hester settled in after the Sebren home run and was equally efficient himself. In the top of the seventh he got a pair of big defensive plays from his catcher, sophomore Casen DeHart.

With a man on third and one away, DeHart held on to a tipped third strike that tried to get away from him for the second out of the inning.

Two pitches later against a new batter, Austin Miley, DeHart blocked a pitch that kicked off his chest and onto the infield grass towards first base.

DeHart took four quick steps and scrambled to retrieve the ball. He then dove back towards the plate and tagged out Andrew Rankin, the Puckett baserunner who was trying to steal home.

The first batter for Loyd Star in the top of the seventh, DeHart reached after getting plunked in the back by Boszort.

A Harrison Hux sac bunt then moved DeHart to second.

Senior Wyatt Hodges swung at the first pitch offered by Boszart in the ensuing at-bat and flied out to center.

With the tying run at second and the winning run at the plate, but with their ace pitcher only needing one more out to win the game, Puckett fans could smell a victory.

Baseball can be a cruel game sometimes in that regard — it ain’t over ‘till it’s over.
With two strikes, Hester hit what looked like a routine out to the second baseman. The ball was misplayed and never even made it to first.

DeHart had stolen third on the previous pitch, just getting under a close tag. He then streaked across the plate on Hester’s contact and scored the game tying run to make things 12-12.

The Hornets weren’t done though. Junior Riley Easterling singled and then freshman Colby Terrell reached via a dropped third strike.

That’s what set the stage for Thornton’s game winner and the dog pile around first base that ensued.

“We really stress effort,” said Britt after the game. “It doesn’t matter if you’re up 10 or down 10, I always want to see them competing and giving it their all. A lot of what happened at the end was about guys giving their max effort and making something happen when it looked like we might be done.”

The Hornets will host game one of their series against Taylorsville Friday at 7 p.m. The Tartars host game two Saturday at 7 p.m. If game three is needed, it will be played at Loyd Star at 7 p.m. on Monday.