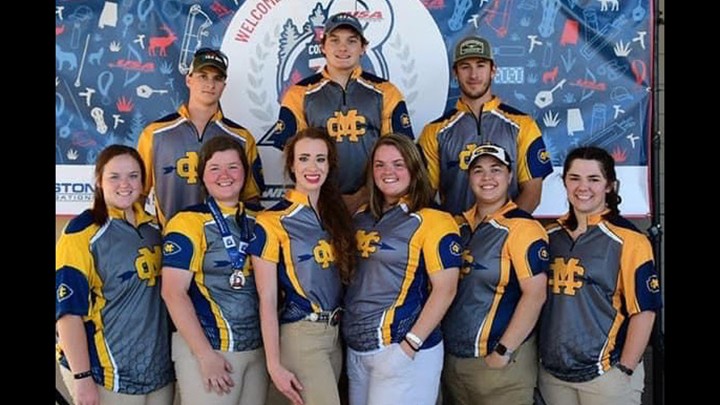 Emily Hootsell isn’t ready to retire her bow and arrows after graduating from Mississippi College in early May.

Hootsell has shown she’s at the top of her game after solid performances with teammates at a South Mississippi tournament to close out the MC archery season.

Winds gusted up to 25 mph, and it rained at times while MC archers shot arrows in an 80-centimeter circle at 50 meters.

“When the day was done, the MC team came through with shining medals,” the coach noted. William Carey University in Hattiesburg hosted the event.

There were seven first-place awards for MC archers, two for second place, and three fourth-place finishes.

Boasting one of the top archery teams in the USA, the Blue & Gold squad keeps getting better. University administrator Jim Turcotte is thrilled with their success.

“The archery team continues to perform at the highest levels. We are proud of their accomplishments,” said the vice president and executive director of the MC Alumni Association. Jim oversees MC’s outdoor programs.

One of MC’s more than 40,000 alumni worldwide, Emily will continue her education. Emily plans to attend the University of Louisiana at Monroe to pursue a master’s in biology. After earning that degree, Emily will go to medical school.

Her final season with the MC Choctaws archery program, Hootsell said, “has been a blast. I am very appreciative of the opportunities to compete nationally with my teammates. Thank you to our coaches and MC staff for providing these opportunities.”