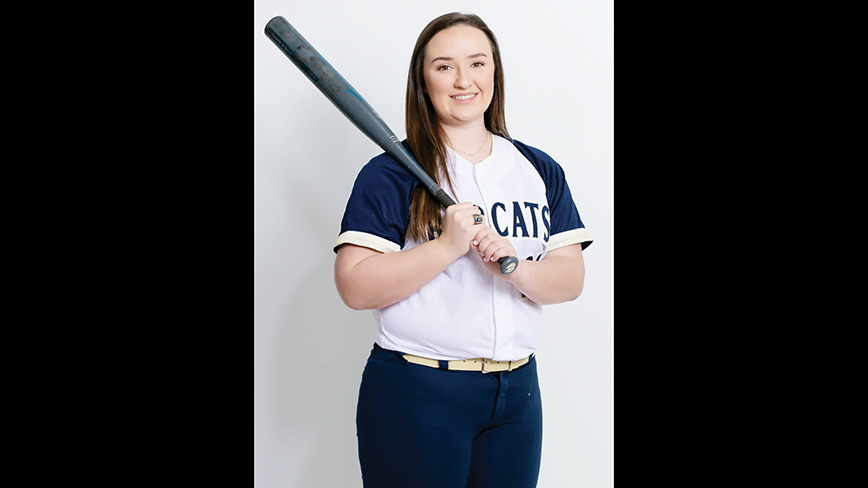 Photo by Theresa Allred Julianna Frazier is The Daily Leader’s All-Area Most Valuable Player in softball.

The record books at Bogue Chitto are filled with softball standouts who made their respective marks at the school on Highway 51 over the years.

Senior slugger Julianna Frazier is one of those foundational players that will forever have her name associated with Bogue Chitto softball. In her final season at BC, Frazier posted 25 RBIs in only 19 games. She hit .472 at the plate and struck out 104 as her team’s primary pitcher.

For her efforts, Frazier has been named The Daily Leader All-Area Most Valuable Player.

All of this isn’t anything new for Frazier. As an eighth-grader, she played in 31 games for a Bogue Chitto team that went unbeaten in postseason play to win the 2017 MHSAA 1A State Championship.

Her sophomore season was when Frazier became one of the hardest outs in the area at the plate. That year she hit for a .489 average and was second on the team with 36 runs driven in. Her eight doubles and three home runs helped earn her Daily Leader All-Area honors that year.

Despite having her junior season cut severely short by COVID-19, Frazier was a key local recruit for Co-Lin head softball coach Meleah Howard.

Frazier signed with CLCC in November as she’ll be coached there by another former BC softball legend in Howard.

What Howard and her staff see in Frazier is someone that can play the corner infield positions while giving the team pop and patience at the plate.

As a senior she hit 10 doubles and four home runs for coach Kris Smith. Frazier drew 16 walks and struck out just four times in her 69 plate appearances. She had a .594 on-base percentage and an .887 slugging percentage.

Voted the 2020 Homecoming Queen by her peers, Frazier has always been the type of player who lets her game do the talking.

“She’s very humble and is the type of kid that leads with her actions,” said Smith. “As a senior leader, she’d step up and speak up when her teammates needed to hear her voice though. She’s just an all-around great kid and you can’t say that enough about her.”

What made Frazier more than just a big bat was her work in the circle though.

In 2019 BC graduated one of the best pitchers in Lincoln County history in Codi Leggett. Leggett had been the main arm for the Lady Cats since junior high and replacing quality pitching like that is never easy.

Frazier worked at her craft though and developed into a strong presence as a pitcher by her senior season.

Having your whole team count on you as a starting pitcher can make some players wilt as they’d rather have another teammate carry that huge responsibility.

Smith says Frazier never shirked from the job because she was all about doing what needed to be done.

“She put in a lot of time to improve as a pitcher,” said Smith. “It’s a credit to her parents as well as they would drive her to Jackson for lessons. You knew she would step up to that challenge because that’s the kind of person she is. Anything you ask of her, whether it’s where she’s batting in the lineup or where’s she’s playing in the field, her reply is going to always be “yes, sir” and she’s going to give it her best.”

The opportunity is there for Frazier to come on at Co-Lin and immediately contribute. The Lady Wolves are losing their top deep threats as third baseman Carlon Brabham and catcher Abigail Carter have now both graduated.

Brabham led CLC with 18 home runs last season and Carter followed with 13 homers of her own.

Smith says Frazier has the work ethic needed to make that leap from high school to the next level.

“Julianna has been a good example for our younger players,” said Smith. “They have been able to see that she’s worked for everything she gets. Her work ethic is what sets her apart. When you’ve got a senior that’s leading your team as a hitter and they’re still putting in extra cage work after practice or they’re hitting of the tee to improve their swing — that’s when you’ve got a special athlete. That’s the example that JuJu has always set.”