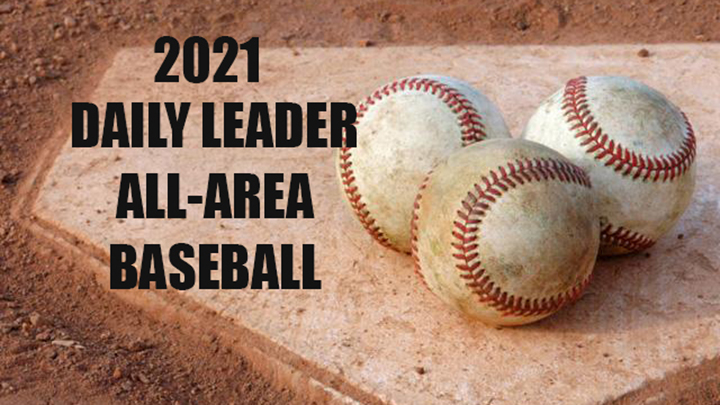 A hard throwing sophomore, Boyte was a leader at the plate and on the mound for Brookhaven Academy in 2021. An intense presence as a pitcher, Boyte struck out 41 in 38.1 innings for coach Caleb Upton. He finished with a 2-1 record and 3.65 ERA for a BA team that won their district. A catcher, Boyte batted .284 with 25 RBIs. Hit three doubles, one triple and three home runs for the Cougars while earning All-District honors.

Just a sophomore, Brister was a source of power in the middle of the batting order for an Enterprise team that finished as Region 7-2A runners-up in 2021. A designated hitter, Brister batted .409 for coach Josh Garrett this season. Drove in 13 runs and hit five doubles while being picked for the All-Region team. Tied for the team lead by getting hit by a pitch 11 times for the Yellow Jackets.

Able to make the toughest plays look easy as a smooth-fielding shortstop, Brogden was an unquestioned leader for BA as a senior. A Co-Lin baseball signee, he hit .479 with nine doubles, one triple and six home runs for coach Caleb Upton. Brogden struck out just nine times in 83 plate appearances while also stealing nine bases. Second on the team with 27 RBIs and was named to the MAIS 4A All-State team and picked for the MAIS All-Star Game. A TDL All-Area selection in basketball.

2021 was the best season of Brown’s career as the senior had the highest average at the plate of anyone on the team for the Cobras. Brown hit for a .508 average on the season and drove in 18 runs as Wesson made the MHSAA 2A playoffs. He led the team in extra base hits with seven doubles and one home run for coach Vance Windom. An infielder and All-Region selection, Brown struck out just four times on the season. Was hit by a pitch 14 times in 2021.

A quarterback on the football field, Burns uses his strong arm as both pitcher and catcher for the Jackets on the baseball diamond. Batted .300 at the plate and drove in 16 RBIs for an Enterprise team that finished as Region 7-2A runners-up. A junior, Burns hit four doubles and one triple in 2021. Second on the team with 13 stolen bases while also earning All-Region honors for coach Josh Garrett.

This year in his senior campaign Carter led Enterprise in innings thrown and strikeouts as the top pitcher on the staff. Finished with 39 strikeouts in 35.1 innings of action as the Yellow Jackets were runners-up in Region 7-2A. Posted a 3.76 earned runs average for coach Josh Garrett. Also hit .255 with 11 RBIs, five doubles and one triple while earning All-Region honors.

Armed with top-end speed and quickness and only a freshman, Cato will be one to watch for years to come at Lawrence County. Cato is nearly an automatic runner-on at the top of the order for coach Seth Avants. He hit .463 on the year and drove in 19 runs. Led the team in hits as he had three doubles, two triples and one home run on the year. Stole 17 bases while earning All-Region honors. Was also an All-Area honorable mention selection in football as a defensive back.

Chemin had his best season as a Yellow Jacket during his senior year of baseball at Enterprise. Hit .305 at the plate for coach Josh Garrett. Tied for the team lead with 18 RBIs. Hit three doubles while playing in the outfield. Also stole 10 bases. An All-Region selection, he was also picked for the Daily Leader All-Area football team as a senior.

A true two-sport star, Cole was tough to tackle in football and a tough to get out on the diamond as a senior for Lawrence County. Earned TDL honors as offensive MVP on the All-Area football team. Used those same fast-twitch abilities to steal 19 bases in 2021 for coach Seth Avants. Hit .432 with three doubles and one triple while earning All-Region.

A part of the Wesson lineup since his freshman season, Diamond had a career-best season as a senior. Hit for a .375 average for the Cobras while driving in 19 runs. Diamond hit five doubles, one triple and finished second on the team with nine stolen bases. Also, second on the team in walks draw, finishing with 15. An All-Region selection for coach Vance Windom, Diamond was an honorable mention All-Area pick in soccer for Wesson.

A slick fielding shortstop, Easterling was a big part of Loyd Star’s success in 2021. The junior hit for a .307 average and drove in 26 runs for coach Jared Britt. Hit 14 doubles and one home run while earning All-Region honors. Stole 12 bases and was one of his team’s top three pitchers. On the mound he struck out 53 in 37 innings to finish with a 3-1 record and a 3.59 ERA for a LS team that finished as one of the top four teams in 2A.

A foundational piece for Lawrence County as a senior leader, Daley continued to produce in all facets during 2021. A Co-Lin baseball signee, Daley hit .397 at the plate and drove in 16 RBIs for the Cougars this season. He led the team in extra base hits with 10 doubles, two triples and two home runs. Also stole 14 bases while earning All-Region honors for coach Seth Avants. As a pitcher he was second on the team with 42 strikeouts in 33.2 innings. Named to the All-Area team as a sophomore in 2019.

A three-sport star senior, no one drove in more runs for BA this season than Fortenberry. Fortenberry had 30 RBIs for coach Caleb Upton while batting .382 at the plate. An outfielder, he also stole 12 bases for the Cougars. Fortenberry was a Daily Leader All-Area pick as a wide receiver in football and as a forward in basketball, he was also picked to play in the MAIS All-Star game for baseball.

The type of player who gives all-out effort in every at-bat, Hux delivered time and again at the top of the Loyd Star lineup as a senior. A designated hitter, Hux drove in 27 runs for coach Jared Britt and the Hornets. Carried a .398 average through the season while hitting seven doubles and one triple. Second on the team with 34 runs scored as the second batter in the Loyd Star lineup. An All-Region selection for the division winning Hornets.

A gritty presence behind the plate as a catcher, Lambert continued to produce as a senior. A Co-Lin baseball signee, Lambert hit .327 and had 19 runs driven in for the Cougars in 2021. Hit five doubles, three triples and a team-high four home runs. A .300 career hitter and four-year starter on Cougar varsity, he was an All-Region selection as a senior for coach Seth Avants.

No one in the area piled up strikeouts at the pace Miller did during his junior season for BHS. Miller struck out 96 in 49 innings for coach Matt White and the Panthers. Struck out 17 in a complete game win over Warren Central in his first appearance of the season and 11 in his last game of the season, a playoff loss to Pearl River Central. Hit for a .315 average at the plate and drove in 10 runs while earning All-Region. An honorable mention All-Area pick as a ’19 freshman.

A scrappy competitor who got the job done with hustle; Price stepped up big for Bogue Chitto in 2021. Hit for a .286 batting average for coach Gareth Sartin. Drove in a team high 22 RBIs and also led the team in hits and runs scored. Hit three triples while earning All-Region honors. A junior, he was also selected for the Daily Leader All-Area team as a kicker in football.

When the postseason rolled around, Tarver had the hot bat for Brookhaven Academy in the playoffs. He had nine RBIs in five playoff games for coach Caleb Upton and the Cougars. An infielder, Tarver hit .391 with 16 runs batted in. Slapped four doubles and smacked three home runs including a postseason grand slam against St. Al while earning All-District honors. Was an honorable mention All-Area selection as a freshman at Enterprise.

As he’s done since his freshman season, Thompson was a cornerstone of the BA pitching rotation this season. The big 6-foot-3 left hander struck out 71 in 54.1 innings of work. Finished with a 6-2 record for coach Upton. Also a first baseman, he hit .346 at the plate and drove in 22 runs, hit seven doubles and four home runs. An All-Area pick as a freshman, he was named to the 2021 MAIS 4A All-State team.

A versatile player throughout his career, Waldrop continued to make a difference for BA in the field, on the mound and at the plate as a senior. Hit .330 at the dish for coach Caleb Upton. Scored 25 runs, second on the team. Drove in 12 RBIs while hitting eight doubles and one home run. Stole nine bases and also made 12 appearances as a pitcher. Struck out 29 in 25 innings of action and was also named to The Daily Leader All-Area football team as well.