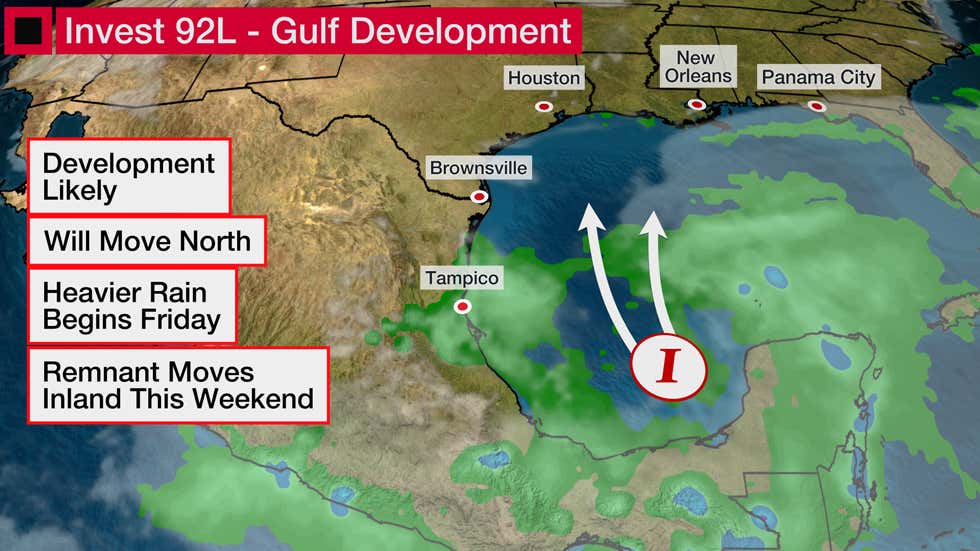 A tropical or subtropical depression is likely to form in the western Gulf of Mexico, and no matter how well organized this system becomes, it poses a threat of flooding rain along a part of the northern U.S. Gulf Coast heading into Father’s Day weekend. This system could also contribute to coastal flooding, dangerous rip currents and gusty winds.

The National Hurricane Center says there is a high chance of a tropical or subtropical depression forming in the western Gulf of Mexico by Thursday night or Friday.

For now, this potential system has been tagged Invest 92L, which is a naming convention used by NHC to track disturbances being monitored for possible development.

Invest 92L is currently a broad area of low pressure in the southwest Gulf of Mexico, or Bay of Campeche, that’s producing somewhat disorganized showers and thunderstorms. Rainfall in that region could trigger flooding in parts of southern Mexico.

Computer forecast models have been consistently suggesting over the past several days that low pressure may become better defined as Invest 92L gets drawn northward through the western Gulf of Mexico later Thursday into Friday.

Unfavorable upper-level winds (wind shear) and dry air are two factors that should prevent this system from intensifying quickly. Those factors will also keep most of the impacts from this system in areas near and well to the east of where its center of circulation tracks.

Here’s what we know right now about the potential threats.

Regardless of the exact track or strength of this system, we expect heavy rain along the northern Gulf Coast beginning as soon as Friday spreading into parts of the Deep South this weekend. This includes already soaked parts of Louisiana and the lower Mississippi Valley.

The heaviest rain is expected from southeast Louisiana into parts of Mississippi, Alabama and the Florida Panhandle. This is where the threat of flash flooding will be highest.

Some soaking rain is also possible in parts of southwest Louisiana and possibly extreme eastern Texas. But, depending on how far east the system tracks, some of those areas could either pick up some heavier rain, or none at all, due to the lopsided nature of this system.

Some locally heavy rain could linger from Alabama and Georgia into the western Carolinas on Sunday, and possibly in the eastern Carolinas and Virginia Monday, as the inland remnant eventually picks up some forward speed. That said, the forecast for how much rainfall to expect in these areas is still uncertain.

Coastal flooding will be another impact, especially in vulnerable areas, from Louisiana to potentially as far east as the Florida Panhandle Friday into Saturday.

High surf and dangerous rip currents will also be concerns in this same general area during that time, and beachgoers are advised to stay out of the ocean.

Gusty winds will accompany this system Friday into the weekend on the northern Gulf Coast. There could be an isolated tornado threat Friday into Saturday from southern Louisiana into southern Alabama, southern Mississippi and the western Florida Panhandle.

June storms in the Gulf of Mexico are fairly typical.

Since 2000, there have 16 named storms in the Gulf of Mexico. Eleven of those made a U.S. landfall.

The most recent one was last year. Tropical Storm Cristobal formed from the remnant of eastern Pacific Tropical Storm Amanda, then made landfall in southeast Louisiana.

Other June Gulf storms were prolific flood producers, including Debby in 2012 in Florida and Allison’s $9 billion flood in 2001 in Houston.

The last June Gulf hurricane was in 2010.

Hurricane Alex made a Category 2 landfall in northeast Mexico triggered massive flooding in Monterrey, Mexico, where up to 35 inches of rain fell.

June Gulf U.S. hurricane landfalls are extremely rare. The last one was Hurricane Bonnie, 35 years ago.